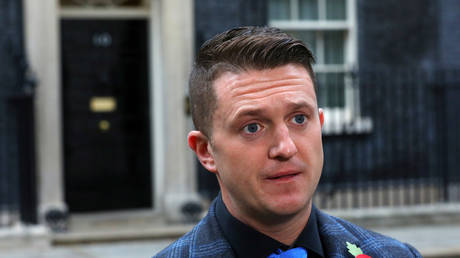 YouTube has responded to pressure to ban Tommy Robinson by placing a series of restrictions on the anti-immigration activist’s channel, including turning comments off and making his videos undiscoverable.

The Google-owned company will place a content warning on Robinson’s videos before they play and they won’t appear as recommendations. Comments and likes are not allowed, and Robinson will also be blocked from live streaming.

Also on rt.com
Tommy Robinson facing 2 years in jail for contempt of court


View counts also won’t appear on any of the English Defence League founder’s videos, and his channel, with over 388,000 followers, will be unable to make money from advertisements, although YouTube already suspended ads on his videos in January.

“After consulting with third-party experts, we are applying a tougher treatment to Tommy Robinson’s channel in keeping with our policies on borderline content,” a YouTube spokeswoman said.

It said that while the far-right activist’s videos aren’t illegal, it was responding to users flagging his content as potentially violating rules against hate speech and extremism.

UKIP advisor Robinson has previously railed against efforts to ban him online, saying the “corrupt media and the establishment” are trying “silence” him.

So @YouTube have banned #TommyRobinson saying his video’s are offensive !

His last video & I guess the straw that broke the 🐫 back was him sharing with his followers what he had just ordered for his breakfast in a pub !

Let’s all take a sec to let that sink in 😱

This is happening in the UK.

But it’s an American company that’s doing it.

Do you really double they will do this to Americans next?

We’re about 12 months away from, say, Tucker Carlson. https://t.co/CACHKZaskD

So now when you search his name all you get is… oh, uh, his numerous appearances on British TV and radio… pic.twitter.com/OQbQubdNbu