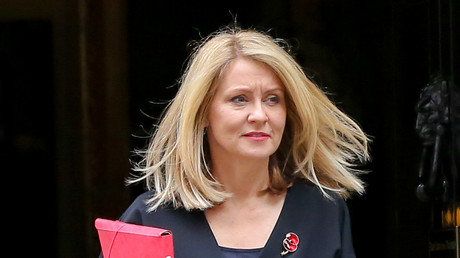 Work and Pensions Secretary Esther McVey has resigned saying the Brexit deal put forward by Prime Minister Theresa May “does not honour” the result of the referendum where a majority of Brits voted to leave the EU.

She is the third high-profile minister to resign over the draft withdrawal agreement agreed between the UK and EU and due to be sealed during a summit on November 25 in Brussels.

Her resignation follows reports she was shouted at by civil servant Mark Sedwill during Wednesday night’s five-hour cabinet meeting. The argument reportedly erupted when she suggested holding a vote over May’s deal.

But she opposed initial reports of her being “left in tears” following the row saying she shed no tears as “I’m made of much sterner stuff than that,” the Telegraph reports.

It follows Brexit Secretary Dominic Raab resigning on Thursday morning after he told the Tory leader he cannot support the Brexit deal she hammered out with the EU. Shailesh Vara, the Minister of State at the Northern Ireland Office, also resigned over the draft deal.

May is expected to make a House of Commons speech on Thursday morning on the proposed withdrawal agreement.

The agreement was reached between the EU and the UK after much-fraught negotiations. Avoiding a hard border in Northern Ireland was one of the main sticking points.

Raab’s resignation was welcomed by former Ukip leader Nigel Farage, who congratulated himself saying a “few more” resignations will spell the ultimate fall of the PM.