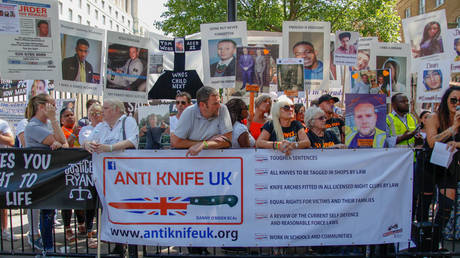 A teacher on the BBC’s political debate show Question Time gave a Tory minister a severe dressing down, accusing his government of not being “fit for purpose” due to its inability to address the current knife-crime epidemic.

The audience member, who said she had worked in education for 15 years, lashed out at the UK government live on air, with Digital, Culture, Media and Sport Secretary Jeremy Wright in the firing line.

The frustrated teacher described as “disgraceful” an announcement made by Home Secretary Sajid Javid earlier this week, in which he said teachers and nurses would be “held accountable” if they failed to report children who they believe had been caught up in knife crime.

The fact [the announcement] was on April 1, I thought it was an April Fool’s joke. To suggest we are in some way further responsible for the fact that children are killing each other, because there is nothing left for many of those children in society is disgraceful.

During the teacher’s passionate intervention, the Tory minister could be seen defensively shrugging his shoulders, which ostensibly irks the visibly exasperated audience member.

… they come out with soundbites like, ‘Teachers and nurses you can identify people who are at risk and if not you’ll be accountable’… the government is not fit for purpose anymore.

Wright had earlier argued that initiatives undertaken by the football organizing body, the Premier League, and the government’s £200 million ($261 million) injection of funds to promote things like extra drama classes, will help counter spiraling knife crime, which is blighting England.


However, the audience participant claimed such initiatives were not solutions to the problem. She insisted that the root cause was the government’s nine-year austerity program, which has seen “millions of pounds worth of cuts to preventative early intervention services that are vital for young people.”