The US is trying to send a message to Tehran, with its aircraft carrier in the Persian Gulf, that even though it is leaving Syria, this doesn’t mean lifting any pressure on Iran, professor of political science Hamed Mousavi said.

A US aircraft carrier entered the Persian Gulf for the first time since 2001 last week accompanied by a fleet of warships in what Washington is calling a “show of force” against Iran.

Tehran is now threatening to block the Strait of Hormuz, the only exit from the Gulf, where a third of all oil trade passes through.

It comes amid rising tensions between Iran and the US after Washington withdrew from the 2015 nuclear agreement and reinstated anti-Tehran sanctions.

RT: Why is the US sending an aircraft carrier to the Gulf? Is it linked to the Pentagon’s withdrawal from Syria? 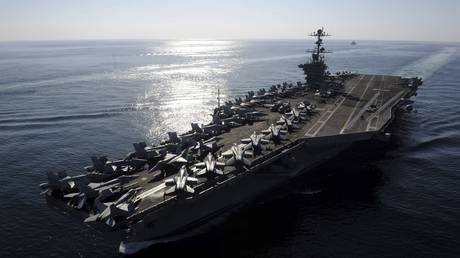 It is somewhat related perhaps to the withdrawal from Syria in the sense that the Americans are trying to send the message to Tehran that even though they are leaving Syria, however, this doesn’t mean they are going to lift any of the pressure on Iran.

Nevertheless, at the same time we should not overestimate this event in the sense that I don’t think the US is trying to plan an invasion of Iran by any means.

RT: Could this aircraft carrier serve any practical military purpose?

HM: There is discussion within Iran over whether the US, under the Trump administration, is ever going to attack Iran. And I don’t think that is going to happen because the US is essentially in no position to make any new major wars because the US right now has a public debt of around $22 trillion. And public opinion in the US is very much against starting a new war.

Also on rt.com
‘Now we’re switching it up’: US carrier enters Persian Gulf for 1st time since Iran deal withdrawal


RT: How will this move change Iran-US relations?

At the same time we are seeing Iran being sanctioned, Iran being threatened and now these kinds of military maneuvers by the Americans. And I don’t think the Iranians can show restraint forever.

We have to remember that the government of the president Hassan Rouhani is under intense criticism at home for perhaps being too soft on the Americans and showing too much restraint. If the way of the Trump administration continues, we would be seeing an escalation of the confrontation between Iran and the US in the near future.