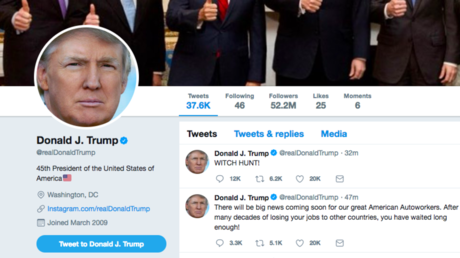 “WITCH HUNT” appears to be a favorite phrase of the president, who has used it multiple times on Twitter. In response to its latest use, one journalist tweeted screenshots listing 27 different occasions that Trump had used the phrase.

Twitter users have assumed that Trump is once again referring to the investigation into alleged collusion between his presidential campaign and Russia, and some have come to his defense, with one response arguing that the “witch hunt” must come to an end “by any means necessary,” while others were more jovial about the whole thing.

A witch hunt that MUST END BY ANY MEANS NECESSARY!

My President screams “WITCH HUNT!!” in the mornings, what does your President do?

We live in a world where the President of America randomly shouts ‘WITCH HUNT!’ and everyone ignores it and goes about their business… https://t.co/FQB5NESHzQ

One user joked that Trump’s disdain for witch hunts was a sign that he is a great defender of women after all.

Trump decrying a “witch hunt” is the closest thing to showing respect for women that he’s ever done.

Trump’s last tweet before the “witch hunt!” drama had been about “big news” that would be “coming soon” for American auto workers, leading another Twitter user to ask if the witch hunt had something to do with the auto industry.