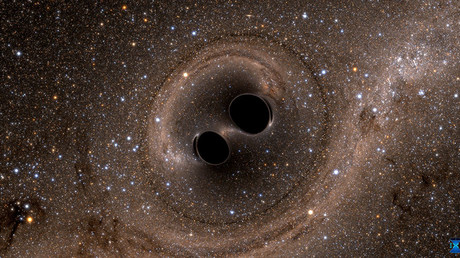 Three US-based scientists won the Nobel Physics Prize for detecting faint ripples flying through space, the gravitational waves predicted a century ago by Albert Einstein. The discovery gives astronomers a a new way to view the universe.

“I view this more as a thing that recognizes the work of a thousand people,” MIT’s Weiss told reporters at the announcement news conference.

Gravitational waves are extremely faint ripples in space, generated by some of the most violent events in the universe. The waves detected by the Nobel laureates in September 2015 came from the collision of two black holes some 1.3 billion light years away. A light year is about 5.88 trillion miles (9.5 trillion km).

The discovery ushers in a new era of gravitational-wave astronomy and provides astronomers with a new set of tools to probe the cosmos. Astronomers previously relied on light, x-rays, radio waves, and other types of electromagnetic radiation emanating from objects in space.

“Now, astronomers can learn about cosmic objects through the quivers they made in space and time,”Cal Tech said in a news release.

In describing the process to non-experts, the Swiss Royal Academy of Sciences said gravitational waves “are always created when a mass accelerates, like when a ice-skater pirouettes or a pair of black holes rotate around each other.”

The waves were predicted by Einstein in 1916 as part of his theory of general relativity, which argues that gravity is caused by heavy objects bending space-time, which itself is the four-dimensional way that astronomers see the universe.

The prize is “a win for Einstein, and a very big one,” Caltech’s Barish told the AP.