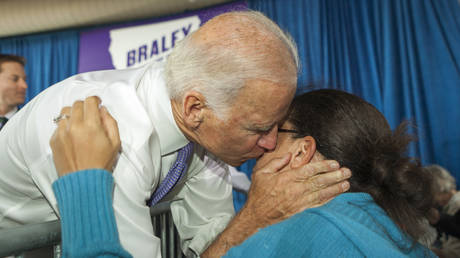 When a Republican faces #MeToo-style accusations, be it President Trump or Judge Kavanaugh, Dems are usually the first to condemn. But when men among their own ranks come under fire, they water down the scandal or find a pretext.

When two women offered their revelations of a ‘gross’ encounter with Joe Biden in a protest against the double standards and hypocrisy among some Democrats concerning women’s rights, the MSM was quick to downplay their outrage by calling the former vice president “affectionate,” and a “fingertip politician,” “a holdover from a different time,” (WaPo) or flip the frame like MSNBC’s Morning Joe hosts by labeling Lucy Flores a “huge Bernie person.”


“This affectionate and sometimes intimate physical style is one of the former vice president’s trademarks, a defining feature of the warm and upbeat persona he has built during more than four decades in the national spotlight,” said the liberal leaning, pro-Democrat Washington Post.

Democrats, therefore, acknowledge his conduct does raise questions, but are quick to dismiss it as his signature “grandfatherly touch.”

Well, google ‘Creepy Uncle Joe’ and see for yourself. It does not look weird, however, to actress Alyssa Milano, who stands at the forefront of the #MeToo movement. In a recent tweet, she supported and exonerated the former vice president.

So where is the gold standard against which the Americans should judge Biden? Does the fact that he is just a “sniffer” and not a “p*ssy grabber” or an “actress seducer” like Harvey Weinstein still qualify him for the race?

Amy Lappos, Biden’s second accuser, issues her stark verdict to Democrats. “Referring to this type of behaviour as ‘simply affection’ or ‘grandpalike’ or ‘friendly’ is ridiculously dismissive and part of the problem,’’ she said in a statement sent to the New York Times.

“Saying ‘but Trump…’ is dangerous and sets the bar for Democratic men far below where it should be.”

There is still a chance for Democrats to practice what they preach.

Their leaders could push Biden to step down, just like they did with Minnesota Senator Al Franken, or ‘Uncle Joe’ could do it himself.

If not, his campaign will be haunted by these stories and countless memes, just like by his role in Anita Hill’s testimony in Congress during Judge Clarence Thomas’ confirmation process back in 1991, in which Biden joined the Democrats’ grilling chorus and for which he said recently he was sorry.

My Democrat friends might want to consider this from then-Judiciary Committee Chairman JOE BIDEN (D-DE) In 1991: The ‘FBI Explicitly Does Not, In This Or Any Other Case Reach A Conclusion, Period’ pic.twitter.com/NvAI3RqevL

Ironically, Hill said she is still waiting for Biden’s personal apology in an interview with Elle magazine in 2018:

“It’s funny you said ‘sort of’ apologized. He said, ‘I owe her an apology.’ People were asking, ‘When are you going to apologize to her?’ It’s become sort of a running joke in the household when someone rings the doorbell and we’re not expecting company. ‘Oh,’ we say, ‘is that Joe Biden coming to apologize?’