The wife of a Saudi blogger jailed for “insulting Islam” has begged Mohammad bin Salman to let her husband go. As the crown prince dines with the Queen during his first official UK visit, writer Raif Badawi languishes in prison.

Badawi was jailed in 2012 for writing about freedom of speech. He was sentenced to 10 years in prison and 1,000 lashes, of which he has so far endured 50 – which nearly killed him.

Since Badawi’s imprisonment, a new king of Saudi Arabia has risen to power – and with him, a new crown prince. Crown Prince Mohammed bin Salman (MBS) is preparing to leave the UK today after a whirlwind three-day tour that saw him meeting Foreign Secretary Boris Johnson, dining with royals and chatting with Prime Minister Theresa May at 10 Downing Street.

According to advertising experts, Saudi Arabia has spent upward of $1 million on a pro-Saudi advertising blitz across the UK capital – and it is hard to miss, complete with larger-than-life billboards on major arterial roads, advertising in newspapers and vehicle-mounted billboards as well as social media sundries. The campaign, designed to promote a prince “bringing change to Saudi Arabia” and “opening Saudi Arabia to the world,” does not seem to have worked. According to surveys, one in three Britons said they didn’t want the prince to come.

The associated social media campaign celebrating MBS has also been a flop. Hashtags #WelcomeSaudiCrownPrince and #ANewSaudiArabia were drowned out by activists flooding the digital landscape with their own hashtags to mark MBS’ trip: #SaudiPrinceNotWelcome, #DeathPenalty, and most succinctly #Yemen.

The crown prince considers himself a social reformer on the grounds that Saudi Arabia’s women can now join the army, drive, and visit the cinema. The prince has claimed the credit for recent corruption battles, jailing even his relatives until misappropriated funds could be recouped. He’s also been tasked with taking the Saudi economy away from its reliance on oil, and leading the Arab country towards a more diverse economic future.

But in the shadow of 50-foot high billboards emblazoned with the prince’s face there are numerous youngsters facing the death penalty for peacefully protesting. And then there is Raif Badawi. Jailed before the prince and his father came into power, Badawi’s wife Ensaf Haidar is publicly urging the prince to pardon her husband.

Through the MailOnline, Haidar is now urging the Crown Prince to live up to his ‘moderate’ reputation and promises of reform in Saudi Arabia, calling on him to grant Badawi a royal pardon while he is in the UK.

“I really hope that Saudi Crown Prince Muhammad bin Salman will forgive Raif and deport him to Canada directly so that we can say that Saudi Arabia is serious in its call for a return to moderate Islam,” she said. “Most of what sent Raif to prison more than six years ago is now the new state project.” 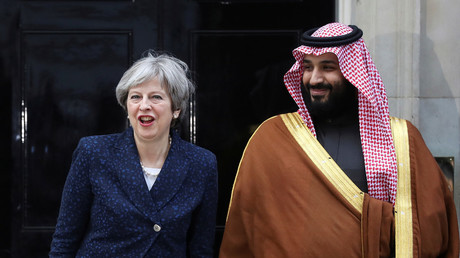 Haidar fled to Canada with the couple’s three children in 2013. She said there should be no reason for MBS not to pardon her husband as everything he wrote about is what MBS is now – at least publicly – promoting as The New Saudi Arabia.

But the question remains – is bin Salman really as much a reformer as he claims? Since his elevation to crown prince, MBS has executed more prisoners than ever before.
According to the British human rights campaign group Reprieve, 133 executions have taken place since he became crown prince in June 2017, compared with 67 in the preceding eight months.

Founder of the Arabia Foundation Ali Shihabi said that those executed were drug ringleaders. He said no one had been executed on political charges… but that claim does not stand up to scrutiny.
In January 2016, 47 people were executed in one day. Several of these were juveniles. One, Ali Al-Ribh, was convicted of taking part in protests calling for political reform when he was only 17 years old.

At Prime Minister’s Questions on the day of MBS’ arrival, Scottish National Party MP Stewart McDonald challenged PM Theresa May to stand in the House of Commons and declare that jailed blogger Raif Badawi “is no criminal and should be set free.” The PM would not guarantee she would raise Badawi’s case with the Saudi prince during his trip.