When the first demonstrations on the streets of Paris were reported nine weeks ago, nobody could have foreseen the endurance, the tenacity and the viral effect of the Yellow Vests movement. After all, the French are known to protest and to strike, it’s part and parcel of their culture. However, by the time this article is being written, protests, marches and demonstrations have broken out in a multitude of European cities. 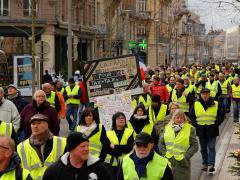 Why Was it Different this Time?

To begin with, it is worth taking a closer look at the situation in France, the point of origin of this “contagion.” There are a few very important elements that set the Yellow Vests apart from past protests. For one thing, unlike previous demonstrations, this one wasn’t led by the unions, nor was it organized by any identifiable political body. The protesters had no unified or homogenous political beliefs, party affiliations or ideological motivations. In fact, through interviews and public statements of individuals taking part in the demonstrations, it would appear that any organized elements, or members of the far-left or the far-right were a slim minority among the protesters. And while those few were the ones largely involved in the violent clashes with the police and the destruction of private and public property, the crushing majority of the Yellow Vests were peaceful, non-violent and largely unaffiliated with any particular political direction.

As the movement grew and spread, many political figures have tried to co-opt it, without success. Front National’s Le Pen, hardline leftist Melenchon, far-left factions and various union leaders, all tried to place their flag on the Yellow Vests, claiming that they align with and can represent their grievances. They all failed. The Yellow Vests might contain individuals with all kinds of political inclinations, but as a whole,…