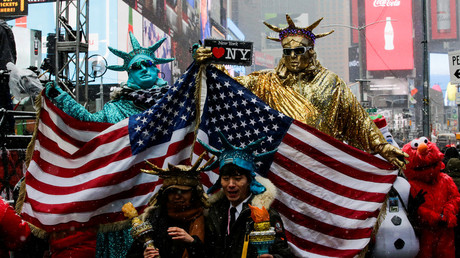 Democrat Senator Chris Murphy clashed online with Donald Trump Jr over whether the controversial ban of Alex Jones from social media has signaled a rise of corporate political censorship in the US.

Murphy, who has represented Connecticut in the US Senate since 2013, was among the vocal supporters of the controversial decision by several tech companies to suspend Jones from their platforms. He hailed it, branding Jones’ show Infowars “the tip of a giant iceberg of hate and lies that uses sites like Facebook and YouTube to tear our nation apart.”

Infowars is the tip of a giant iceberg of hate and lies that uses sites like Facebook and YouTube to tear our nation apart. These companies must do more than take down one website. The survival of our democracy depends on it.

The original decision was perceived by many online commenters as an act of political censorship by private companies, and an attack on free speech. Murphy’s position in this context was regarded as cheering the deterioration of a key element of US democracy.

I can’t stand InfoWars. I can’t stand pompous socialists like Chris Murphy either. Senator, get out of the way and let us lead our lives without you baby-sitting us. https://t.co/rjqxph6HGM

The survival of our democracy depends on the restriction of free speech? This is a chilling comment from a government official. If his constituents care at all about freedom, they will make him pay for it come election time. https://t.co/r35fzNmb0o

Murphy is correct
The survival of our democracy
Is at stake

Once the Left gets their #ThoughPolice fully functional

Conservative ideas of all kinds are next on the chopping block https://t.co/wHWJ99W3B1

The backlash seems to have a partisan tint, coming amid speculation that Silicon Valley’s transparent user policies are being applied in a way that is biased against conservative voices on their platforms. The theory is shared by President Donald Trump and some members of his administration.

How long before Big Tech and their Democrat friends move to censor and purge @BreitbartNews, @DailyCaller and other conservatives voices from their platforms? https://t.co/sFS7mr8Pco

Senator Murphy rejected the criticism, arguing that restrictions on free speech by companies could not be compared to government censorship and that the case of Jones – who is a controversial figure standing accused of endorsing conspiracy theories and bullying – would not lead to more cases of online censorship of popular voices.

Private companies deciding not to let their platforms be used to spread hate and lies is not the same as government censorship. If it feels the same, then we need to ask why a small handful of companies have so much control over the content Americans see.

1. Uh, POTUS is engaged in a DAILY bullying campaign to try to censor the press.

2. The “slippery slope” argument is right wing tripe. No company is compelled to smear the reputations of dead kids’ parents, and no elected official (even Democrats) are required to stand idly by. https://t.co/N14bpvFSXh

US-based social media have long been criticized by some liberal commentators for lacking transparency in how they ban content and for having an apparent political bias. But it became a hot issue in the US after companies like Facebook, Google and Twitter were accused of failing to stop alleged Russian interference during the 2016 presidential election. The Democratic Party leadership used accusations against Moscow to explain Hillary Clinton’s defeat in the election.