Keeping her email server after she left office is akin to borrowing Air Force Two for 18 months and then giving it back to the government at the end of the day, claims political analyst Charles Ortel.

Meanwhile, declassified information suggests the conclusion of the Hillary Clinton email scandal was prepared before the investigation had concluded. 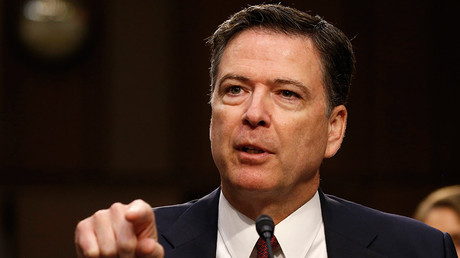 Former FBI director James Comey had his final statement into Clinton’s use of a private server ready while she was secretary of state, two months before the probe ended in July 2016.

RT: What do you make of this latest revelation on the Clinton email investigation?

Charles Ortel: I think it is a very dangerous sort of revelation. I would implore people to understand the real issue is not whether or not Hillary Clinton and others had classified information on this private server. The real issue is who allowed Hillary Clinton, while secretary of state, and the various cronies associated with her and employees and contractors, to operate this private server during her entire tenure and then to let her and her team continue to operate, and hold all of the contents that were on this server for almost two years after she had left the post. This is akin to deciding that what you are going to do is to take Air Force Two after you leave, and use it for 18 months and then give it back to the government at the end of the day. It is very damaging information.

Wow, looks like James Comey exonerated Hillary Clinton long before the investigation was over…and so much more. A rigged system!

RT: Why would James Comey draft the statement and then wait for two months to officially close the probe?

CO: There are no good reasons. The Federal Bureau is the Federal Bureau of Investigation, it has amazing power, particularly against American citizens, particularly against people with assets, to get to the bottom of what really happened. Not what was in Hillary’s book. It sure seems to me that it is past time for serious investigators around the world to look back into the long history of James Comey – predating his role in the 2001 and 2005 investigation of the Clinton Foundation – to ask what he, what Rod Rosenstein, Andrew McCabe, what Robert Mueller and others, what conflicts they may have in getting to the bottom of what was really going on with this server, with the Clintons, with the Foundation, and with the possible operation of a pay to play scandal while Hillary was secretary of state. This reeks.