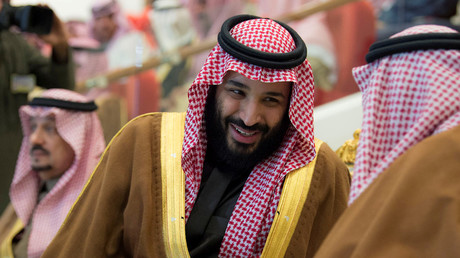 Crown Prince Mohammed bin Salman of Saudi Arabia will touch down in the UK on Wednesday for a whirlwind tour that will see him meet the Queen, the PM & other dignitaries. So why is the trip steeped in such controversy?

Those with a keen eye may have noticed the advertising campaign promoting the prince. Not his visit, but the prince himself. Ads on social media, in newspapers, and mobile and billboards across London have left many with raised eyebrows, wondering exactly what the fuss is all about.

The prince, 32, has only been in the top job for six months. The heir-apparent to 82-year-old King Salman is making his first trip to the UK in his new capacity. If his advertising campaign is anything to go by, the prince is eager to spread the word about the significant domestic reforms currently taking place in his home country.

I just arrived in London and was greeted by these billboards plastered with the image of the Saudi Crown Prince. Seriously? pic.twitter.com/ZjE74ea1eG

Mohammed bin Salman – commonly referred to as MBS – has been credited with kick-starting progressive reforms in Saudi Arabia. Since his 2017 appointment, women can now drive, join the army, and visit the cinema in the conservative Islamic nation. The prince has also worked to take on corruption within the royal family and the Saudi government. MBS has also pushed for the economy to move away from its reliance on oil; developing a broader, more market-oriented economy.

While the prince might sound like a rosy character so far, mass protests are expected to kick off at Downing Street on Wednesday. Activists say that MBS is complicit in war crimes in Yemen, where the Saudi-led coalition forces have killed hundreds of civilians and, at one point, sealed off complete access to the country. Sealing off the borders and ports prevented aid access to the poverty-stricken nation, exacerbating the Cholera crisis that has so far affected 31,421 of Yemenis.

According to the UN, more than 9,000 people, over half of them civilians, have been killed in Yemen. More than 52,000 have also been injured in the fighting since the war began in March 2015. While the UNHCR cite that some 22 million Yemenis are in need of aid due to the conflict.

Downing Street is expected to discuss Saudi Arabia’s human rights record with the prince, though some are going further MPs vowing to join picketers outside the prime minister’s official residence. Activists will focus on the £4.6 billion (US$6.4 billion) worth of aircraft, helicopters, drones, and weapons that the UK has sold to Saudi Arabia since conflict began in 2015.

Shadow Foreign Secretary Emily Thornberry took to BBC Radio 4 this morning to discuss the prince’s impending visit, telling listeners that she would tell the Saudi Arabian government that “the bombing has to stop” if she were foreign secretary.

“The first thing I would do is say our relationship with you is important and we should be friends… [but] you’re going too far [with the war in Yemen],” Thornberry said. “The bombing has to stop, and there needs to be an inquiry into breaches of international law.”

While radio announcers were keen to list off the positive reforms implemented by MBS, Thornberry was quick to point out that there have been other, more startling statistics since his elevation to crown prince.

Three billboards on trucks welcoming Mohammed bin Salman to London were spotted driving around the city ahead of the crown prince’s UK visit tomorrow. One of them stopped in front of the Qatari embassy. Pure coincidence, said the driver, who didn’t know who paid for the ads. pic.twitter.com/9nQ0XEYFAh

She also reminded listeners that the prince had allegedly arrested former Lebanese Prime Minister Saad Hariri. Hariri was visiting Saudi Arabia only days after he resigned as leader when he was placed under house arrest.

For Britain, rolling out the red carpet for the crown prince may mean that the Saudis choose to float part of their state oil group, Aramco, on the London Stock Exchange. Such a move would be a significant boon for the British economy, and a massive boost in the UK’s post-Brexit economic landscape.

MBS’ visit in the coming days will be a tour of diplomacy and relationship building. The UK government is eager to prove that it can be a reliable ally and business partner, and the Saudi government wants a platform on which to show its new, quick-changing liberal ways – that’s if the Prince’s ad campaign is anything to go by.