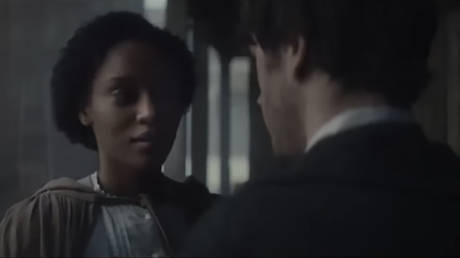 Genealogy site Ancestry.com has apologized and removed an ad featuring a pre-Civil War interracial couple after critics slammed the spot, claiming it whitewashed the widespread sexual exploitation of slave women.

“We very much appreciate the feedback we have received and apologize for any offense that the ad may have caused,” Ancestry.com spokeswoman Gina Spatafore wrote in an email, adding that the spot had been removed from YouTube and was in the process of being pulled from TV stations.

The offending commercial shows a lovestruck white man promising his black lady-love that “there’s a place we can be together, across the border” (presumably Canada, since the web address given at the end of the ad is Ancestry.ca, not Ancestry.com). The woodenly-acted scene fades into a marriage certificate dated 1857, six years before slavery was abolished in the US. While the spot reportedly played without incident on Utah TV stations earlier this month, the backlash hit this week, when the clip went viral on social media.

Many pointed out that sexual exploitation of black slave women by white men – including but not limited to their masters – was epidemic in the antebellum South.

What in the world is this foolishness @ancestry? Why do white people insist on romanticizing my Black female ancestors experiences with white men during slavery? They were raped, abused, treated like animals, beaten, and murdered by white men. Stop with … https://t.co/7RMSOMm477

ancestry dot com: how can we overly romanticize & create an irresponsible, ahistorical depiction of the relationship between white men & black women during the period of chattel slavery that completely disregards its power dynamics & the trauma of sexual exploitation? https://t.co/s5BqnoSg9x

Others dug deeper, finding more reasons it was offensive.

There are so many issues with @Ancestry creating this Runaway commercial: 1) Ancestry hinged this spot on a white savior 2) They replaced the black male runaway trying to find freedom for black family with a white man. Effectively making slavery not about white oppression. #adospic.twitter.com/JstCecYSI2

This isn’t the only way that @Ancestry whitewashes slavery. In the past year they also changed their search engine. It used to be if your ancestor owned slaves it would pop up when you searched their name. That’s no longer true. The slave censuses are no longer name searchable. https://t.co/3dTEa5Ivpf

Or suggested alternate scenarios Ancestry could have used.

Rosa parks: why not?

White man: because you already have a place……in my heart.

*ancestry dot com logo with a soft fade out*

KKK: you can’t have an underground railroad!

Harriet Tubman: Why not?

KKK: because we built you a real one.

*Ancestry dot com logo with a soft fade out*

My question is…..Why didn’t they do an Ancestry commercial with Slave descendants finding lost family? Which is very difficult sometimes.

Some suggested ways the company could atone for its misstep.

@Ancestry! This is the what our ancestors endured. Romanticizing is fetishizing. It’s disrespectful! What you CAN do is get your gov’t to change the release of census laws so we can see our lineage in 1 database. You are In cahoots. Every 72 years for 10 yrs is harsh! #ADOSpic.twitter.com/7TZKerr4bt

@Ancestry , the fact that you keep retweeting the same computer generated reply shows just how “out of touch” you are to the very cause you claim to be committed to.Try starting with the earliest census records where no one was considered black but rather of the different tribes.

and at least one competitor jumped at the chance to promote their own product.

When you allow other people to tell your story, things like this can happen 🤔🤷🏾‍♀️

When you know better and ARE better, you do better….AFRICANancestry.com. #pioneers

The ad was pulled just hours after the outrage began…and the retraction generated its own backlash.

If the sexes were reversed, the woke would probably be celebrating the ad as “daring”.

Pretty soon, every commercial will offend someone. And it will continue until somebody says ENOUGH!