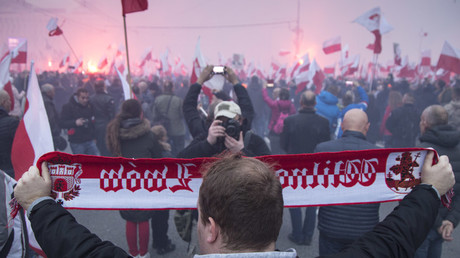 Far-right European figures, including former leader of the English Defence League (EDL) Tommy Robinson, attended a huge demonstration in Warsaw on Poland’s Independence Day. Around 60,000 nationalist and fascist demonstrators attended, in what has been described as one of the largest far-right gatherings in the world.

Apart from Robinson, who covered the event for the far-right Canadian based The Rebel Media, there were nationalist figures from Italy, Sweden, and Germany in attendance. On Twitter, the former leader of the EDL, and briefly head of the UK branch of PEGIDA, described the march: “Poland is fortress Europe. I’ve never seen pride & Patriotism like I saw this weekend. Don’t believe the MSM slander & tarnishing of the polish people.”

Under a sea of national flags and burning red flares, attendees listened to speeches, sang nationalist songs, and listened to Polish hip hop. While the march was ostensibly about Polish independence and religion, with some participants marching under the slogan ‘we want God,’ the demonstration saw a heavy presence of white nationalism, anti-Semitism, and Islamophobia.

One banner read: “White Europe of brotherly nations,” while upon another was written: “Pray for Islamic Holocaust.” Chants of “pure Poland, white Poland” and “refugees get out” were reported and others waved flags adorned with far-right insignia.One participant told the state-run TVP he was marching “to remove Jewry from power.”

On the weekend he could have been paying respects to the British men and women killed fighting fascism, Tommy Robinson chose to march in Poland alongside neo-Nazis and Hitler worshippers. Tiny treasonous bellend. https://t.co/9qbOXs2eA6

Among the groups organizing the event were the All Polish Youth, National-Radical Camp and the National Movement, all of which have roots to pre-World War II anti-Semitic organizations. National Movement bears the same name as a 1930s organization that advocated the complete eradication of Jews from Poland. Around 90 percent of Polish Jews were killed during the holocaust.

The march also had support from some parts of the ruling Law and Justice (PiS) party. Interior minister Mariusz Błaszczak described the event as a “beautiful sight,” adding “We are proud that so many Poles have decided to take part in a celebration connected to the Independence Day holiday.” During his trip Robinson met with PiS MP Dominik Tarczyński, who later took to Twitter defend Robinson and accuse the British media of “FAKE NEWS!” over their coverage of the demonstration.

FAKE NEWS!
Not even that! This is outrageous!@MailOnline You are full of…
Liars who trying to manipulate.
Thank God People are not stupid.
You’ll pay for this. I do promise. As a MP I’ll take care of it.
Many tolks to You, hmm?
O yes! https://t.co/xvlEmNj9J6

A mixture of anti-fascists, community organizations, and LGBT groups protested the event, with a large police presence mainly keeping the rival groups apart. Several incidents of violence were reported, though no major disturbances occurred.

The British far-right and their Polish counterparts have a growing relationship that often belies the latter’s criticism on European immigration. According to charity Hope not Hate, now-banned group National Action regularly met with Polish activists, including Radziu Rekke, “a gun-toting Pole living in Manchester, who leads late night expeditions into Manchester’s Jewish areas where he and others stalk Jewish buildings,” wrote the charity. In June 2014, a man was stabbed in north London after the Polish neo-Nazi group Zjednoczeni Emigranci stormed a music festival.