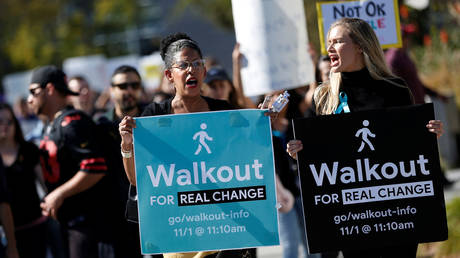 Employees at web giant Google are in an uproar after it was reported the company had been pushing to overturn a labor law ruling protecting activists who organize over workplace email and forums.

Google has reportedly lobbied with the National Labor Relations Board (NRLB) to change a 2014 regulation after activists within the company organized a series of high-profile protests last year, including a 20,000 person walk-out in November over Google’s alleged mishandling of sexual assault accusations against several executives.

“Google would rather pay lawyers to change national labor law than do what’s right. Google is aiming to silence us at a time when our voices are more essential than ever,” claim employee organizers from the group ‘Google Walkout for real change.’

…showing that Google would rather pay lawyers to change national labor law than do what’s right. Google is aiming to silence us at a time when our voices are more essential than ever: from Maven, to Dragonfly, to the Walkout, collective action and worker organizing… (2/4)

At the time of the walkout, Google CEO Sundar Pichai saying the executives were “encouraged” by the employees’ efforts “to create a better workplace.” Just a few weeks later, however, Google’s lawyers sent an email to the NLRB, urging it to overturn the regulation that protected such workplace organization, according to Bloomberg.

There were reportedly two such emails to the NLRB, basing their argument on comments by Republican lawmakers in opposition to the Obama-era rule – in contrast to Google employees’ overwhelming support for the Democrats.

A Google spokeswoman told Bloomberg the company’s objection to the regulation was part of a legal defense strategy and unrelated to the walkout. The company is under investigation for allegedly threatening employees for expressing their political outlook on workplace email threads and forums. A lawyer of one employee involved in the lawsuit claims his client was targeted for dissenting from the “very, very left-wing office culture” of “tribal” political correctness.

Also on rt.com
Google and Facebook broke company records for US government lobbying in 2018


Google has made a habit of using its vast resources to make sure US laws are in accord with the company’s interests. Just last Tuesday, it was revealed that Google broke all-time spending records in 2018 lobbying the US government on privacy and antitrust policies.