For many years, US corporate media have consistently failed to adequately inform audiences about the Palestinian right of return.

Even though the refugees are a crucial reason that the issue of Israel/Palestine remains unresolved, only a small portion of the coverage addresses the right of return. I used the media aggregator Factiva to search the databases of three major US newspapers:  the New York Times, Wall Street Journal and Washington Post. In a combined search of these three publications, Factiva returns results for 45,285 pieces that mention the Palestinian issue over the last ten years. Of these, only 624 contain the phrase “right of return.” In other words, since March 2009 these outlets have published 44,661 articles that bring up the Palestinian question while omitting a phrase that is absolutely integral to it, and one of the main reasons that it remains unresolved.

To put it another way, only 0.01 percent of coverage of Palestinians or Palestine in the last ten years in the Times, Journal and Post informs its audience about the right of return or even mentions it at all. That these are US media outlets writing for largely US audiences underscores the seriousness of this hole in the coverage, because US tax dollars are used to prevent the Palestinians from exercising this right.

When the right of return is mentioned in media, pundits and other journalists often baselessly call its legitimacy into question. In the Wall Street Journal, Michael Weiss (2/1/11) referred to it as the “Palestinians’ so-called ‘Right of Return.’”  The Post’s Jennifer Rubin (10/2/14) opted for the same formulation, criticizing Mahmoud Abbas, the leader of the Palestinian Authority, because he wouldn’t “give up the so-called right of return.”

Weiss and Rubin are lying to their readers. Using the qualifier “so-called” is a way of saying that the right is illegitimate, but UN Resolution 194, adopted in 1948 by a 35–15 vote after at least 750,000 Palestinians had been expelled from their homes, could hardly be clearer: It says that

refugees wishing to return to their homes and live at peace with their neighbors should be permitted to do so at the earliest practicable date, and that compensation should be paid for the property of those choosing not to return and for loss of or damage to property.

the inalienable right of the Palestinians to return to their homes and property from which they have been displaced and uprooted, and calls for their return.

the West Bank and Gaza have permanent residents, but there are also many Palestinian refugees in other countries who claim a disputed right of return, while many Israeli settlers live in the West Bank and assert their country’s sovereignty there.

Missing from this sentence, which purports to be part of a neutral Q&A on Israel/Palestine, is any indication of who is doing the disputing and on what basis, or of whether the settlers’ claim has any merit. A more accurate phrasing would be

the Palestinians have a UN-backed right of return that Israel and the US have prevented them exercising, while many Israeli settlers living in the West Bank assert their country’s sovereignty there in defiance of the Fourth Geneva Convention. 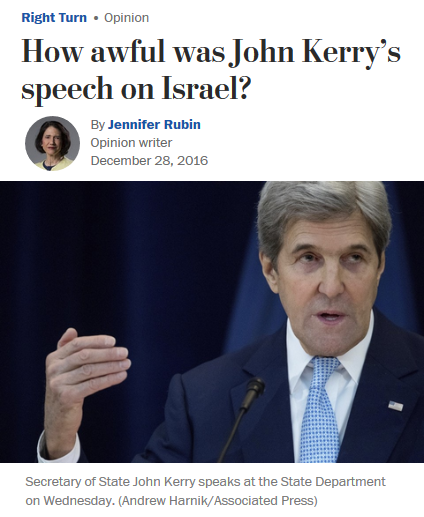 When then–Secretary of State John Kerry gave a speech at the UN outlining the US’s decision to abstain from voting on a resolution critical of Israel, Rubin complained in the Post (12/26/16) that Kerry and the resolution

do not demand, for example, Palestinians give up the right of return. He is either intentionally obtuse or lying about the resolution’s predetermination of key issues between the parties.

She doesn’t even bother to explain why she thinks Palestinians should be told to give up this right; to her, it seems, Palestinian rights are simply bogus ipso facto.

Another Post article (2/28/18) said it is “justifiable” that Israel considers the right of return a “deal breaker” in negotiations with Palestinians. No further explanation is offered; apparently the authors see it as self-evidently justified to keep ethnically cleansed Palestinians from going back to their homes.

Another way the right of return is distorted in media coverage is when its exercise is cast as an act of violence. The Post’s Colbert I. King (5/15/17) wrote that:

More than 5 million Arabs and their male descendants, now living in Jordan, Syria, Lebanon, Gaza and the West Bank, count themselves as refugees from Israel’s 1948 War of Independence with an “inalienable right” to return to the homes and property in the area that is Israel. That claim is fundamental to Palestinians. It is, however, a nonstarter in Israel. For Israel to recognize and allow implementation of the “right of return” claim—with the millions that would flood in to Israel—would be, as Israeli leaders fear, an act of national suicide by the Jewish state.

The routine twisting of the facts is happening here: We’re not talking about “5 million Arabs” who “count themselves as refugees,” but the 5 million Palestine refugees from 1948 who are registered with the United Nations Relief and Works Agency. 1948 was not the only time that Palestinians have been made refugees, but King overlooks these populations: According to Badil, a resource centre for Palestinian residency and refugee rights that has special consultative status with the UN’s Economic and Social Council, a further 2.25 million Palestinians have become refugees since 1948, and 718,000 more are internally displaced.

King also transforms Palestinians returning to homes from which they were expelled into an act of aggression: They would be “flood[ing] in to Israel,” wrecking everyone and everything in their path, as floods are wont to do. 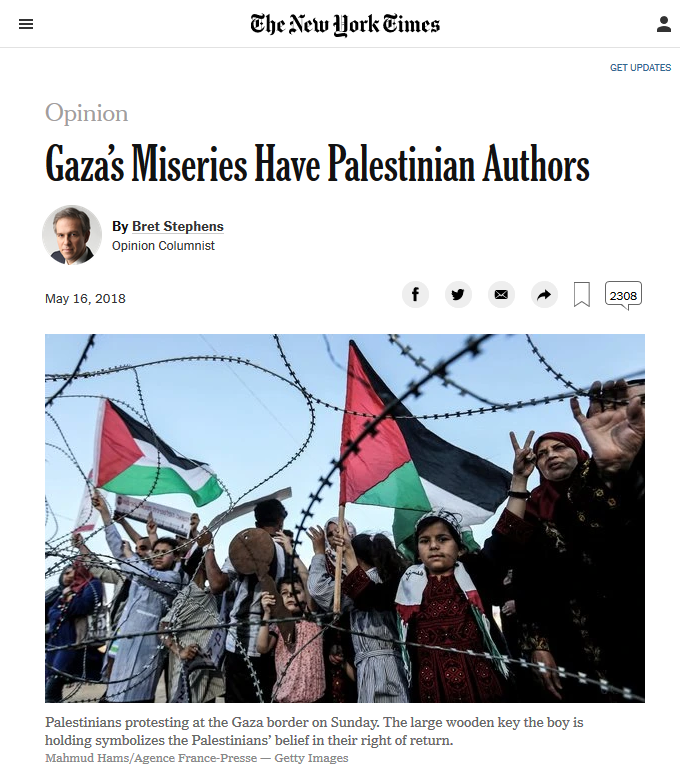 For Bret Stevens (New York Times, 5/16/18), marching for the right of return is a “grotesque spectacle”

When he endorses the view that the right of return would be “an act of national suicide by the Jewish state,” King is referring to how Palestinian refugees returning to parts of historic Palestine that include what is currently the Israeli side of the 1949 armistice line would alter the present demography and and make it so that Jewish people are no longer the majority. In the Times, Bret Stephens (5/16/18) took an analogous position:

What is the ostensible purpose of what Palestinians call “the Great Return March”?

That’s no mystery. This week, the Times published an op-ed by Ahmed Abu Artema, one of the organizers of the march. “We are intent on continuing our struggle until Israel recognizes our right to return to our homes and land from which we were expelled,” he writes, referring to homes and land within Israel’s original borders.

His objection isn’t to the “occupation” as usually defined by Western liberals, namely Israel’s acquisition of territories following the 1967 Six Day War. It’s to the existence of Israel itself. Sympathize with him all you like, but at least notice that his politics demand the elimination of the Jewish state.

Notice, also, the old pattern at work: Avow and pursue Israel’s destruction, then plead for pity and aid when your plans lead to ruin.

One way to look at Palestinians realizing their UN-guaranteed rights is as “national suicide by the Jewish state,” as King does. Or as, in Stephens’ terms, “the elimination of the Jewish state.” Note that both columnists, from virtually opposite ends of the establishment media spectrum, are embracing a version of what Adam Serwer (Atlantic, 4/19) offered as a defining trait of white supremacism: “that a certain ethnic group has a legitimate claim to permanent political hegemony.”

Alternatively, one can adopt a perspective that prioritizes democracy and international law, and says that finally allowing the refugees justice will enable conditions in which the present dynamic of ethnic partition, occupation and Levantine Jim Crow, which depends on the denial of Palestinian rights, can be replaced by Jewish and non-Jewish people living with equal rights in a one-person/one-vote system across all of historic Palestine. 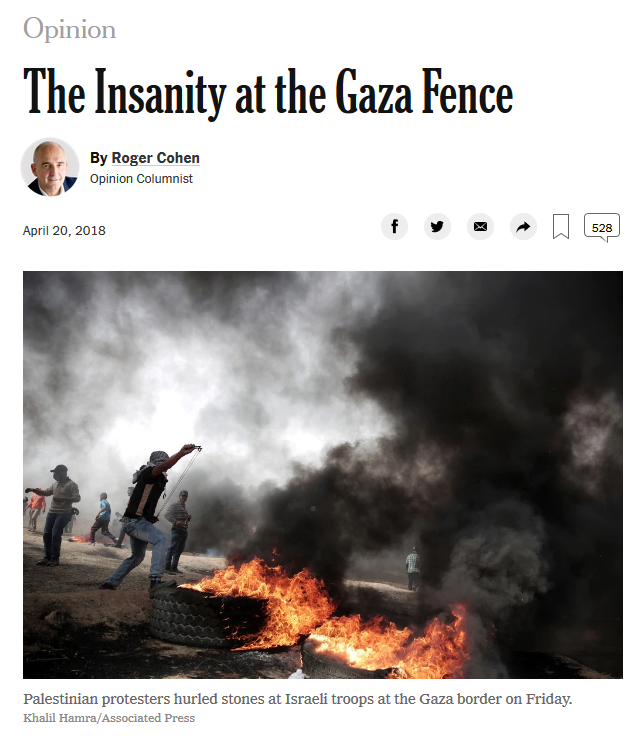 Taking the supremacist approach, Roger Cohen of the Times (4/20/18) asserted:

There’s no point mincing words: The right of return is flimsy code for the destruction of Israel as a Jewish state. It’s consistent with the absolutist use of “occupation” as defining Israel itself and with the view that the sea is a pretty good place for Jews to end up.

Here Palestinians exercising rights afforded to them under international law, and by any coherent sense of justice, is the same as driving Jewish people into the sea. This equation does not seem to be made by anti-Zionist Jewish organizations, who decline to see Palestinians as bloodthirsty savages who will upon being uncaged immediately commence the slaughter of Jewish people.

When news outlets ignore or deny the Palestinian right of return, they are saying that Palestinians matter less than a supposed right to dispossess and oppress them. This leaves Palestinians with no right to live in their homeland as anything other than second-class citizens or, most often, disenfranchised subjects of military occupation in a Middle Eastern bantustan.