As I was reading, on board an Air Canada flight from Mexico City to Vancouver, The Globe and Mail coverage of the horrors that have been unraveling for several days on the island of Sulawesi, I felt two powerful and contradictory emotions: I wanted to be there, immediately, ‘on the ground’, in the city of Palu, filming, talking to people, doing everything possible to help… and at the same time, I sensed that I was ‘already there’, so many times before, whenever the nightmares like those in Sulawesi were taking place all over the Indonesian archipelago.

And I wrote about them, I documented them, I was sending warnings, but nothing was done. The government (or I’d rather call it the ‘Indonesian regime’), is expert in hearing nothing and doing nothing, ignoring all frontal criticism. The same goes for the Indonesian elites. They are blind as they are deaf, as long as they can grab, steal and then, do absolutely nothing for the welfare of the Indonesian people.

Look, in 2004, I was there, right after the tsunami hit Aceh. It took me just a few days to arrive. More than 200,000 people died! The same stuff: a powerful earthquake, then tsunami. Well, nobody really knows how many vanished, but 240,000 is the absolute minimum! A quarter of a million! That is 100 times more than a number of those who died during 9-11 in New York. 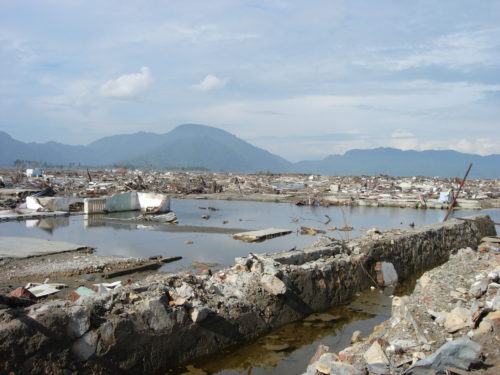 What was left of Banda Aceh

In Banda Aceh, I lived in a tiny house that had been flooded just a few days earlier, in a room where…