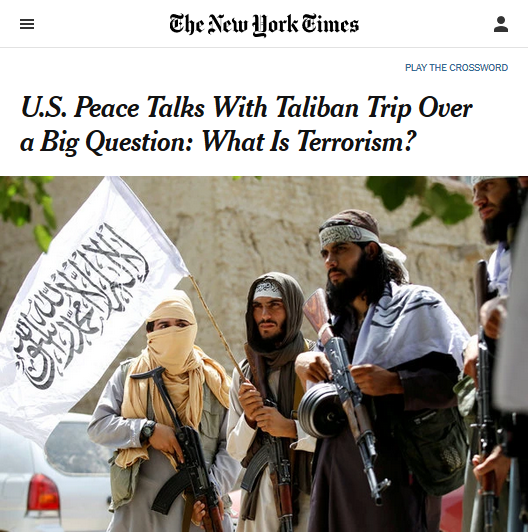 “What is terrorism, and who is a terrorist?” the New York Times (3/7/19) asked in a recent report on the hindering of peace negotiations between the United States government and the Taliban in Afghanistan—without suggesting any possible answers to these questions. When the headline of a story literally includes the phrase “Big Question: What Is Terrorism?” you might think it would offer at least one plausible definition proposed by any party or individual involved in these discussions. But not a single definition is suggested by anyone in the report, written by Mujib Mashal.

This isn’t the first time in the Times’ propagandistic coverage of the War on Terror that the paper has raised the question without attempting to answer it; a 2005 piece  (8/14/05) whose headline included the big question, “What Is Terrorism?,” also didn’t propose any definitions either.

In its recent story, the Times reported that the current snag in negotiations has to do with US negotiators insisting that the Taliban promise not to allow Afghanistan to be used by terrorist groups (implying that the Taliban should promise to abolish itself, since the Times also mentions that US leaders like Secretary of State Mike Pompeo consider the Taliban to be a terrorist group). The Taliban is reportedly balking, “saying there was no universal definition of terrorism,” but would promise not to allow Afghanistan to be used as a launching pad for international attacks.

While “terrorism” is notoriously difficult to define by scholars and journalists, the Times has admitted in other places that it and other outlets tend to say whatever law enforcement wants them to say in domestic cases (3/22/18): “For the most part, journalists tend to follow the lead of law enforcement on whether to call a crime an act of terrorism.”

While there’s no reason to treat the United States military’s Guide to Terrorism in the 21st Century definition of terrorism (8/15/07) as authoritative, its emphasis on the motivations of terrorists rather than their identities is useful in several ways. It defines terrorism as “the calculated use of unlawful violence or threat of unlawful violence to inculcate fear; intended to coerce or to intimidate governments or societies in the pursuit of goals that are generally political, religious or ideological.” It’s the exact opposite of the standard that the corporate media has consistently pursued in favor of sensationalist and racist coverage throughout the War on Terror, emphasizing the identity of the perpetrators, rather than their motivations (FAIR.org, 3/29/18). 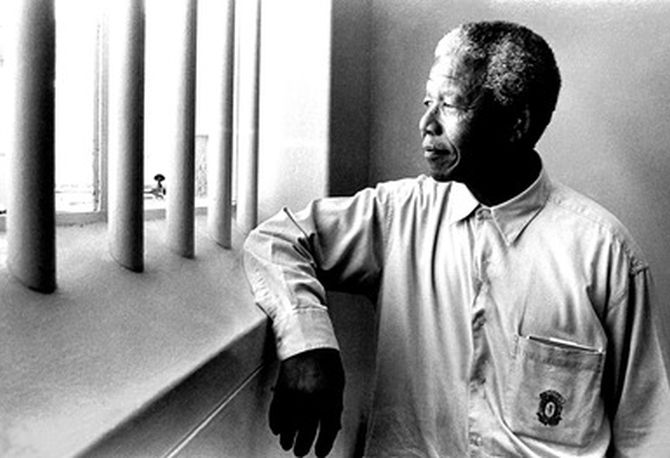 Fifteen years after winning the Nobel Peace Prize, Nelson Mandela was still officially a “terrorist” in the eyes of the US government.

Although the Guide’s definition suffers from not distinguishing between politically motivated violence against civilians and insurgent guerrilla actions against the military forces of foreign occupiers and oppressive governments—a blurring that can lead to absurd designations, like Nelson Mandela and the African National Congress being categorized as terrorists by the US government until 2008 (NBC, 12/7/13). But its emphasis on the motives for violence allows it to be used to measure the United States’ own actions by making the nationality, ideology, military might and skin color of terrorists irrelevant considerations.

Foreign policy critic Noam Chomsky has observed (in Hegemony or Survival) that the primary reason even official definitions are avoided is that (if universally applied) it would inevitably follow that the United States is “a leading terrorist state,” which would blow apart the conventional thesis that terrorism is a “weapon of the weak” rather than “primarily a weapon of the powerful.” 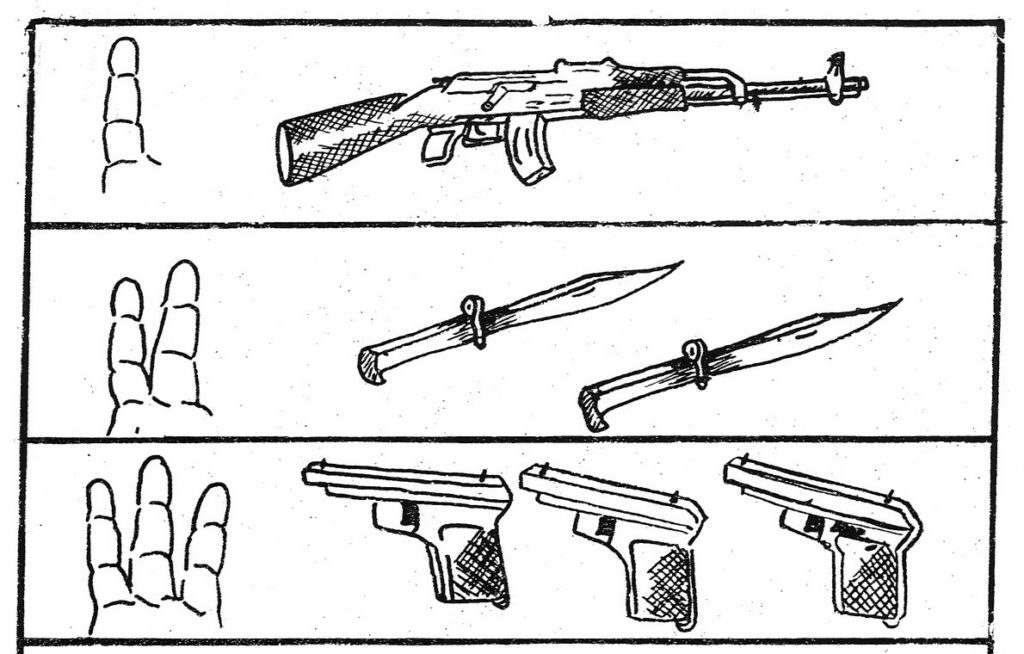 A US-supplied textbook taught Afghan children how to count—and kill.

One would never get the impression that the United States government is a leading sponsor and perpetrator of terrorism from the Times’ report. No mention is made of the United States’ history of supporting and arming the mujahideen fighters (the forerunners of Al Qaeda and ISIS) in Afghanistan against the Soviet Union in the 1980s (Salon, 11/17/15), or of its history of supplying Afghan children with textbooks containing violent images and militant Islamic teachings (Washington Post, 3/23/02).

From the article, one would also never find out that the Afghanistan War is in violation of the UN Charter (Guardian, 8/23/17), and that the United States has no legal right to insist or impose any conditions on the Afghan people when it euphemistically refers to the illegal invasion as a “military action,” which would legitimate violent resistance against an occupying force or aggressor, regardless of whether or not one considers the Taliban to be a legitimate, representative force of the Afghan people.

FAIR (9/30/16) has documented the irony of corporate media expressing no concern over exposing the United States, via “free trade” agreements’ Investor/State Dispute Settlement provisions, to lawsuits from foreign corporations against regulations that undermine corporate profits—while simultaneously abhorring legislation that would make it easier for 9/11 victims to sue Saudi Arabia on the grounds that it would expose the United States to foreign lawsuits for the terrorism it commits abroad. Such blatant double standards and implicit admissions over what constitutes terrorism make it hard to dismiss conclusions that “terrorism” is merely a “meaningless propaganda term,” cynically deployed by the corporate media to advance American foreign policy (Intercept, 6/19/15).

A serious discussion about terrorism that would permit questions over whether aspects of American foreign policy can qualify as terrorism would strike at the core of the media’s own preferred ideological narrative, and would jeopardize the United States’ basis for the War on Terror, since its credibility depends on the unchallenged assumption that the United States is not a terrorist state.