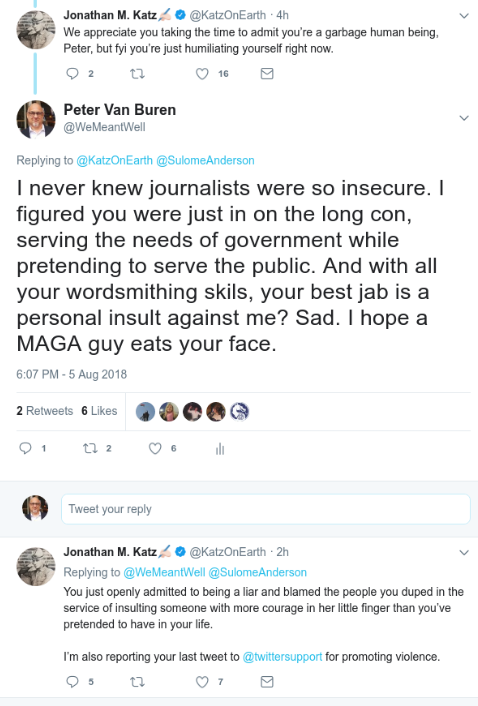 More than a few people have cited the exchange below as justification for my forever trip down the Memory Hole, my ban from Twitter. I used to be there as @wemeantwell.

My bad zombie joke about #MAGA, or anything else I wrote that was flippant, is not writing I’m proud of. But ask yourself if indeed what I was doing, in the words of Twitter’s auto-response to me, “harasses, intimidates, or uses fear to silence someone else’s voice,” or if I was just being rude and childish. Ask yourself if whatever I did means you can never read anything I’ve written on Twitter over the past seven years, if it means I should never be allowed to write there again.

Does it justify censorship?

Before you say yes, keep in mind that Twitter allows you to block me, mute me, never see me again. That’s your decision, and good for you, and good riddance to me. But censorship takes that decision out of your hands, and allows Twitter to make it on behalf of literally the entire planet.

Though the “he called me human garbage first” excuse is pretty weak, it is useful to show the context of my allegedly game-changing Tweet. I think anyone who has dipped into the sticky waters of Twitter, or lived as an adult on earth, has heard much worse. I think also my line about a MAGA guy eating someone’s face can be seen by reasonable people as a rhetorical slap, not a literal invitation to zombie attack.

Think of it like people saying “Go kiss my ass!,” or “F*ck yourself.” I don’t think in those instances anyone expects you to contort and smooch the buttocks or to perform a unilateral sex act. There’s a difference between saying “Go jump in a lake” to end an argument and an invitation to go swimming.

But corporate censorship needs only the finest of hooks. Twitter is happy to allow calls for white genocide by New York Times editorial board member @SarahJeong, “understanding” they are not literal, while being shocked – Shocked! – to see me invoke a scene from Fear the Walking Dead.

And anyone who thinks I was banned for simply being rude on Twitter does not understand much about the point of censorship.

Peter Van Buren blew the whistle on State Department waste and mismanagement during Iraqi reconstruction in his first book, We Meant Well: How I Helped Lose the Battle for the Hearts and Minds of the Iraqi People. His latest book is Hooper’s War: A Novel of WWII Japan. Reprinted from the his blog with permission.