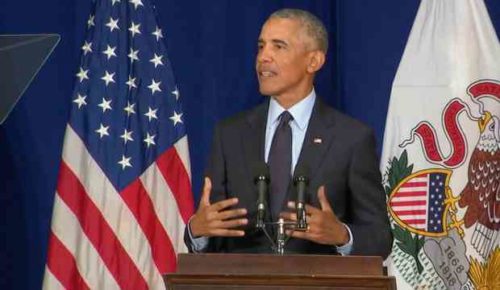 On September 7, 2018, speaking at the University of Illinois Urbana Champaign, President Obama said that Democrats are running on “good new ideas like Medicare for All…”

This indicates a significant shift in support of National Improved Medicare for All (NIMA). President Obama is campaigning for Democrats in the mid-terms and his public support for NIMA right at the start shows how far we have come and that we have a real opportunity to win in the next few years.

Eight years ago when President Obama was pushing through the Affordable Care Act (ACA) he asked in his State of the Union whether anyone had “a better idea.” The next day I attempted to deliver a letter to the president describing a “better idea” – National Improved Medicare for All. They refused to accept the letter so when he came to Baltimore, Carol Paris, MD and I stood outside the meeting holding a sign saying “A Better Idea: Medicare for All” and attempted to deliver the letter to Obama again. We were arrested. See the letter and the video of our attempts to deliver it below.

We have come a long way, and we appreciate Obama’s support. His support for National Improved Medicare for All is a turning point moment — it is no longer about defending the ACA, it is about putting in place the real solution to the US health crisis.

It is also significant that Democrats, including President Obama, are not campaigning on fixing the Affordable Care Act (ACA), which was their message…