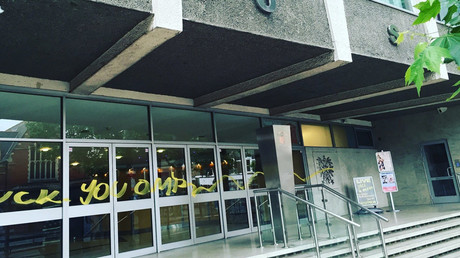 On Tuesday, London communities showed solidarity with a Polish Center that had been targeted with xenophobic graffiti. Slurs were scrawled across its doors after Thursday’s Brexit referendum result, which is being blamed for a spike in racist attacks.

On Tuesday, families, schools and members of the public met at the center to show their support for London’s Polish community in the borough of Hammersmith.

Founded in 1967 by Polish engineer Roman Ludwik Wajda, the center aims to promote Polish culture and art, and houses several theatres, the library of Poland in London, a gallery, and a bookshop.

Police say they are investigating the incident. A single male suspect was captured on CCTV spraying yellow graffiti on the doors of the community center in the early hours of Sunday morning, investigators say.

Cambridgeshire police are also investigating hateful notes reading “Leave the EU. No more Polish vermin,” which were allegedly posted through letterboxes and left on car windows of Polish residents in the UK on Friday.

Warsaw’s embassy in the UK has said it is “shocked and deeply concerned by the recent incidents of xenophobic abuse directed against the Polish community and other UK residents of migrant heritage.”