The US will overthrow the Iranian government once socio-economic conditions there, shaped by sanctions, are ripe for a revolution, presidential lawyer Rudy Giuliani told a cheering crowd on the day of the deadly attack in Ahvaz.

“I don’t know when we’re going to overthrow them. It could be in a few days, months, a couple of years, but it’s going to happen. They’re going to be overthrown, the people of Iran have obviously had enough,” said Giuliani at a so-called ‘Iran Uprising Summit’ held by the Organization of Iranian-American Communities in New York.

Speaking to members of Iranian expat and dissident communities in the US, who are seeking political change in Iran, the 74-year-old lawyer praised Donald Trump’s bullish approach towards Tehran, boasting that sanctions slapped on Iran, after the White House unilaterally withdrew from the internationally-backed nuclear deal in May, are stalling the country’s economy and damaging Iranians’ lives.

Mayor Giuliani:
You, the Iranian people & supporters of the #PMOI/#MEK, are keeping the protests alive. Your support, the work you’re doing.
We know the powerful influence you have Iran. If anyone doubts it, why does the Iranian regime wants to kill you so much.#FreeIranSummitpic.twitter.com/rbjMSeJZAX

“The sanctions are working. The currency is going to nothing … These are the conditions that lead to successful revolution, and, God willing, non-violent revolution,” he said.

While the US administration has vowed to maintain economic pressure on the Islamic Republic with more sanctions to come into force on November 4 to target Iran’s energy sector, the State Department immediately distanced itself from Giuliani’s comments, stressing that Trump’s personal lawyer does not speak for the administration. 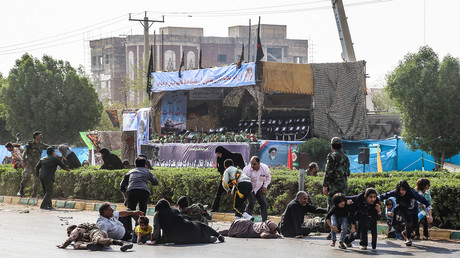 The imposition of sanctions has impacted Iran’s economy and caused the country’s currency to drop in value. The worsening socio-economic conditions have also led to street demonstrations across the country. While Tehran has acknowledged the people’s right to demonstrate, it urged the public to do so in a civil and a peaceful manner. At the same time, the Iranian leadership pinned the blame for sporadic violence on the US and their allies, accusing them of pushing for a regime change in the country.

While Trump has never been shy of supporting the opposition in Iran, his National Security Advisor John Bolton recently noted that a straightforward “regime change” in the country is not being considered by the administration. “Just to be clear, regime change in Iran is not American policy. But what we want is massive change in the regime’s behavior,” Bolton told Reuters in August.

Giuliani’s anti-Tehran comments came immediately after the Iranian supreme leader accused the US and its regional “puppets” of instigating the deadly shooting attack at a military parade in the city of Ahvaz that killed at least 25 people on Saturday.

After staying silent for hours following the atrocity, the US State Department finally issued a statement saying that Americans “stand with the Iranian people against the scourge of radical Islamic terrorism.” At the same time, however, National Security Council spokesman Garrett Marquis added that the “regime in Tehran” should better focus on keeping its citizens “safe at home.”