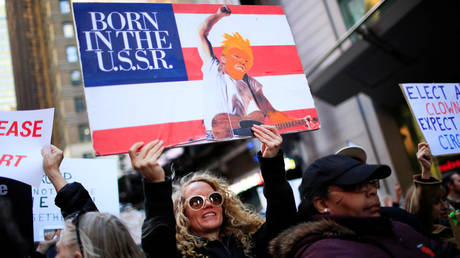 The imploded Russian collusion narrative seems to have had little impact on changing the minds of its devotees. In fact, the hysteria may only have increased, judging by yesterday’s rallies and their motto, “Release the Report!”

In a bizarre spectacle, demonstrations across the country organized by the MoveOn political action committee, with the endorsement of MSNBC’s Rachel Maddow herself, have called for the immediate release of the full, uncensored report by Special Counsel Robert Mueller.

In order to energize the gatherings, NYC’s Times Square rally also included the distribution of a surreal songbook, complete with lyrics of popular tunes like the classic “My Favorite Things” and “It’s Not Unusual” by Tom Jones, changed to include references about alleged details in the conspiracy narrative.

The pro-Mueller ralliers in Times Square have distributed this songbook. They are currently leading a mass singalong. Please read these lyrics pic.twitter.com/1y36LDFeEg

In call-and-response unison, the crowd chanted the modified lyrics of songs like Gloria Gaynor’s “I Will Survive” into the mantra “We will survive!” with expletive-laden lyrics.

Attorney General William Barr has pledged to release a version of the report, redacted in order to protect certain confidential information contained within it.  Subsequently, The New York Times published an article using unnamed sources alleging that some of the members of the Mueller team were unsatisfied with Barr’s four-page assessment of the report regarding whether President Donald Trump was cleared of obstruction of justice.

Russiagate enthusiasts have clung to this as an implication of a cover-up by Barr and that there may still be a glimmer of hope that the allegations about collusion or obstruction may be in the report, even though Mueller did not issue any further indictments in the probe.