A former British Army chief has said that Russia feels under “strategic threat” from the West’s rollout of NATO and EU membership so close to its borders, adding that the UK and allies should address concerns diplomatically.

The comments were made by General Lord Nick Houghton on the Tuesday morning edition of BBC Radio 4’s Today program, where the former army chief of staff was discussing the ongoing row over more funding for the Ministry of Defence. 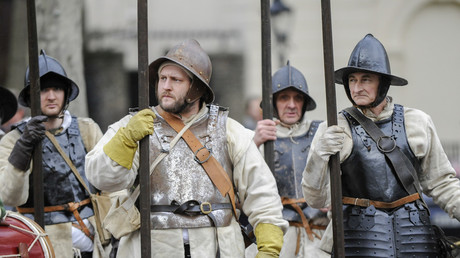 When asked if comments made earlier this year by Defence Secretary Gavin Williamson – that Russia “should shut up and go away” – were appropriate, Houghton said they wouldn’t be his “chosen words” and that the issue required a greater understanding of “Russia’s predicament.”

“I think that there needs to be a greater understanding of Russia’s predicament. Russia feels that it is under strategic attack from the West. It feels the current rules based order denies it its sense of historic entitlement. We have rolled elements of NATO membership and EU membership up to its border.

“We have, as I said, denied it where it said it believes it should be, and we need to accommodate that diplomatically,” he added.

Houghton, who served as Chief of the Defence Staff (CDS) from 2013-2016, said that while Russia posed a hybrid warfare threat to the UK, it was not existential to the nation.

“Well certainly many of the risks which a few years ago were latent risks have become patent risks. There is terrorism. There is cyber. There is the hybrid threat of Russia. But in many respects a lot of people talk about Russia as this hybrid threat.

“But the reason that you can keep it at the level of hybrid warfare which is not existential to the nation is the fact that just about the aggregated capability of NATO can defeat Russia in a hard power conflict.”

Warning that a continuing decline in capabilities by members of the alliance would “encourage Russia to be more aggressive,” he said: “Russia respects hard power. And although hybrid warfare is a threat, it’s the sort of threat that operates, in respect to the United Kingdom, at a non-existential level.”