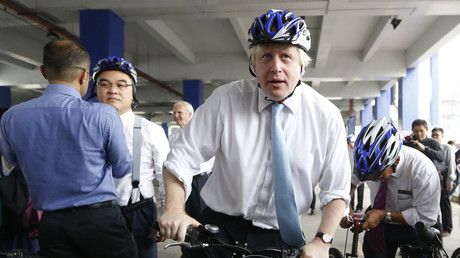 Boris Johnson found himself the butt of a joke when the President of Kenya seemed to forget his name, referring to him simply as the “bicycle guy” during a press conference alongside his British counterpart Theresa May.

The remark drew a smile from May, as rumours continue that Johnson is planning to oust her in a leadership contest.

Despite being Britain’s top diplomat until recently, Johnson has a history of gaffes and offensive remarks with ex-British colonies like Kenya – often at the receiving end. In 2016, Johnson suggested that then-president Barack Obama had an “ancestral dislike of the British empire” due to him being “part-Kenyan.”

The ex-foreign minister has also used the racial slur “piccaninnies” when referring to black people, and talking about their “watermelon smiles.”

May is on a charm offensive in Africa, looking to sign trade-agreements for a post-Brexit Britain. During the press conference, Kenyatta said: “I don’t think Brexit is going to dent our ability to strengthen trade.”