Donald Trump and Theresa May are locked in a war of words that could seriously damage their so-called ‘special relationship.’ The PM criticized the US president after he bizarrely retweeted anti-Muslim videos posted by the far-right group Britain First.

At first, it appeared that the @realDonaldTrump account had been hacked on Wednesday morning when the POTUS retweeted three Islamophobic videos posted by Jayda Fransen, the far-right group’s deputy leader. Britain First rejoiced and asked Trump for help promoting their message.

.@Theresa_May, don’t focus on me, focus on the destructive Radical Islamic Terrorism that is taking place within the United Kingdom. We are doing just fine!

All eyes turned to the Tory prime minister for a response. May’s spokesman said Trump had been “wrong” and had spread “hateful narratives which peddle lies and stoke tensions” with the re-posts.

The three videos were captioned ‘VIDEO: Muslim migrant beats up Dutch boy on crutches!’ ‘VIDEO: Muslim Destroys a Statue of Virgin Mary!’ and ‘VIDEO: Islamist mob pushes teenage boy off roof and beats him to death!’

After Trump got wind of May’s response, he fired a warning shot of his own online. He tweeted: “@Theresa_May, don’t focus on me, focus on the destructive Radical Islamic Terrorism that is taking place within the United Kingdom. We are doing just fine!” 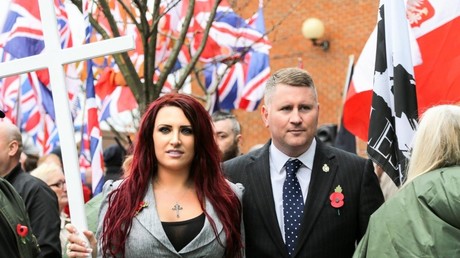 Theresa May has not written anything on Twitter to her 423,000 followers, despite being directly tweeted by the president – who is followed by 43 million people. The British response was the first open criticism of the Trump administration from Downing Street, despite rising tensions between the two nations, particularly over trade.

The special relationship was rocked earlier this year when Trump refused to wade in on a row between aviation industry giants Boeing and Bombardier over a court case brought by the US firm Boeing. Thousands of jobs could be lost in Northern Ireland after the US ordered huge tariffs on orders of the C-series, threatening the entire UK aviation workforce.

Labour leader Jeremy Corbyn also reacted furiously. “I hope our government will condemn far-right retweets by Donald Trump. They are abhorrent, dangerous and a threat to our society,” he said.

Business Secretary Sajid Javid also got involved. He wrote: “So POTUS has endorsed the views of a vile, hate-filled racist organization that hates me and people like me. He is wrong and I refuse to let it go and say nothing.”

Foreign Secretary Boris Johnson also had his say. He tweeted: “Britain First is a divisive, hateful group whose views are not in line with our values. UK has a proud history as an open, tolerant society & hate speech has no place here.”

The spat could threaten Trump’s planned state visit to the UK. Tracy Brabin, the MP for Batley and Spen, called for the invite to be rescinded.

She told Radio 5Live: “These retweets are incredibly troubling. He has shown such lacking leadership over the months that he has been the president of the United States, but this just beggars belief.

“Justifying this organization that, as Brendan [Cox – husband of murdered MP Jo Cox] says, this hatred has consequences and we know more than any in Batley and Spen what those consequences are. And absolutely the government must get involved in this. We are not holding this man’s hand, we are challenging him and holding him to account.”