As the war over Gina Haspel’s nomination to lead the Central Intelligence Agency has waged on this week, we’ve been gifted an incredible batch of corporate media apologias for the CIA’s decades-long legacy of torture, extrajudicial killings and civil liberties violations. Perhaps most remarkably, these outlets have spent hundreds of words arguing that Haspel should be confirmed as the next director of the CIA—despite having overseen a black site prison where detainees were brutally tortured, and directing the destruction of evidence of this illegal and inhumane practice—because it’s the feminist thing to do.

This was the perfect line for the Trump administration’s Haspel push—a notion informed both by the Republicans’ elementary understanding of identity politics and their obsession with calling out perceived liberal hypocrisy: After all, how could any self-respecting Democrat vote against a woman to usher the United States’ international spying apparatus into its next no doubt sinister phase?

White House spokesperson Sarah Huckabee Sanders made this point plainly in a tweet last week, saying:  “Any Democrat who claims to support women’s empowerment and our national security but opposes her nomination is a total hypocrite.”

There is no one more qualified to be the first woman to lead the CIA than 30+ year CIA veteran Gina Haspel. Any Democrat who claims to support women’s empowerment and our national security but opposes her nomination is a total hypocrite

One small step for Gina Haspel is one giant leap for little girls everywhere who dream of growing up to become government interrogators!

Trump himself touted that, in addition to being “the most qualified person” for the job, Haspel is also a woman—a convenient data point for an administration that’s handed a staggering 80 percent of its top jobs to men (most of them also very wealthy and white). 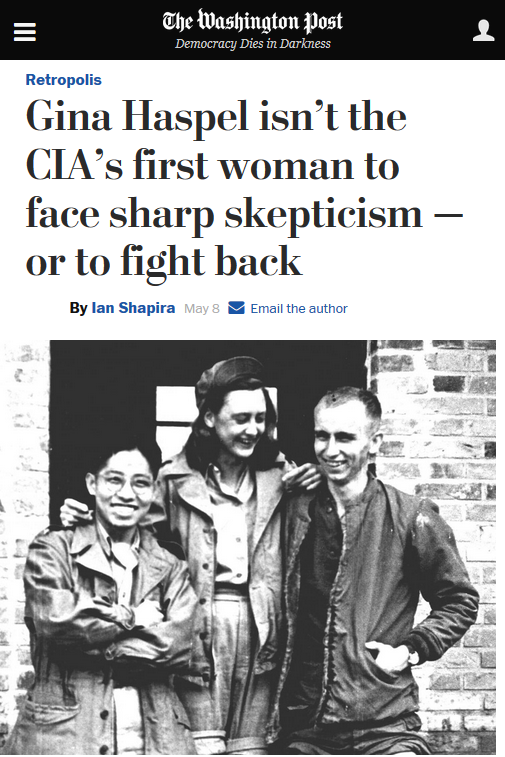 After noting Gina Haspel’s record of torture–which it calls “interrogation”–the Washington Post (5/8/18) refers to her “hard-won reputation as a woman who does her job well.”

And, shamefully enough, members of the media fell right in line to push this abominable narrative, with two of the most egregious examples published by the Washington Post. On Tuesday, Post features writer Ian Shapira published a story (5/8/18) highlighting all the brave female spies who’ve fought for our freedom—an honorable legacy that would count Haspel as its heir apparent, if only the Senate would confirm her—under the headline: “Gina Haspel Isn’t the CIA’s First Woman to Face Sharp Skepticism—or to Fight Back.”

The bulk of the piece is dedicated to highlighting characters like Virginia Hall, the legendary spy who evaded capture by the head of the Gestapo on just one leg, and the role of women like Jennifer Matthews, who led a team of operatives hunting Osama bin Laden before she was killed in Afghanistan along with six other CIA operatives.

The piece just once mentions the most weighty criticism of Haspel—that she ran a secret CIA black site prison in Thailand and was deeply involved in carrying out and covering up the agency’s illegal torture program. Before Haspel’s arrival at the notorious black site, Abu Zubayah, a Saudi-born Palestinian citizen who’s now considered a “forever prisoner” of Guantanamo Bay, was subjected to water torture 83 times. Under her direct supervision, Abd al-Rahim al-Nashiri, a Saudi-born Palestinian citizen, was also subjected to prolonged torture and brutal interrogation in Thailand.

Still, Shapira writes, her ascension “would mark a massive milestone for the spy agency, which has long been dominated by men.” The Post writer continues about the agency at large:

To its credit, the CIA from its earliest days has acknowledged the gender inequities and has attempted to remedy them….

Over the years, the CIA has dramatically increased the number of women in its ranks, with the agency reporting the percentage of women at the agency was just under 50 percent, including full- and part-time employees. 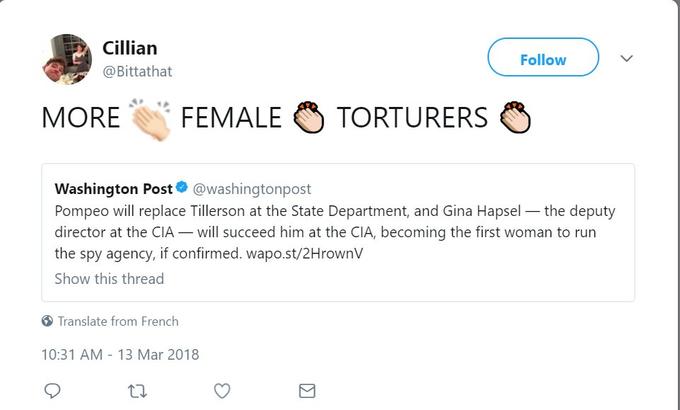 The joke here is so well-worn in lefty internet circles that it’s become a meme: If you can’t dismantle American empire, the least you can do is HIRE MORE WOMEN TORTURERS!

But an even more craven example was published by the Post a day earlier (5/7/18), in which a female former CIA operations officer linked Haspel’s likely confirmation to the #TimesUp and #MeToo movements against sexual harassment and abuse by powerful men.

The writer, Karen deLacy, writes: “Much like #MeToo and #TimesUp, Haspel’s nomination provides an opportunity to get gender equality right in the field of espionage.” She goes on to argue, without evidence, that Haspel would address head-on an apparent “inclusion crisis” at the agency, where she says fewer women are applying for leadership positions, while discrimination and harassment based on gender persist. She also provides a mushy outline of proposals rife with institutional jargon that Haspel could borrow as head of the CIA: First, champion accountability and transparency, then study the scope of the problem. 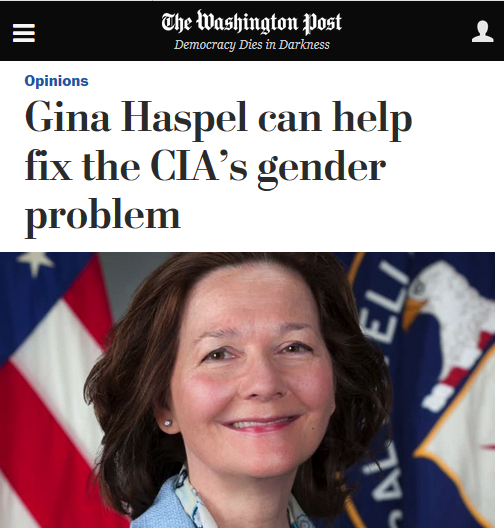 “Haspel’s nomination provides an opportunity to get gender equality right in the field of espionage” (Washington Post, 5/7/18).

This is awfully rich coming from a career officer with an agency that has a long, ignoble history of successfully resisting almost every effort to demand any degree of accountability for its actions—a mission Haspel has dutifully championed. By now, it’s been widely reported that Haspel drafted the order to destroy evidence tapes documenting torture at the Thailand site, although the CIA conveniently declassified and released a memo in April clearing Haspel of any official wrongdoing, saying it wasn’t her decision to destroy the tapes; she was just following orders. And yet deLacy, writing in the pages of the Post, would have us believe that her career with the CIA somehow demonstrates an interest in increased accountability.

Don’t misunderstand me: discrimination and harassment are critical issues for any organization to grapple with in an effort to root out those who abuse their power. But to imagine that reckoning happening at the CIA—an organization in which abuses of American power are baked into its very mission—feels ill-fated at best.

It should perhaps go without saying that neither of these pieces, nor the vast majority of stories singing Haspel’s praises, have mentioned the torture that continued even after her departure: like the story of Fatima Boudchar, a Libyan woman who was kidnapped while fleeing then-dictator Moammar Gadhafi and turned over to the CIA. She arrived at the same black site in Thailand, where she was bound to a stretcher for as long as 14 hours a day and beaten in the stomach—all while pregnant. In her first-person account of her horrific treatment—some of which she says was “so awful I can’t talk about it”—written in the New York Times (5/8/18), Boudchar says she was forced to give birth, alone, while in CIA custody. As a result of her treatment, her son weighed just four pounds at birth.

This is the work Haspel proudly said she’s dedicated her life to in her opening statement before the Senate Intelligence Committee. Although she verbally backed away from overplaying her womanness, she fed the existing narrative around her confirmation anyway:

It is not my way to trumpet the fact that I am a woman up for the top job, but I would be remiss in not remarking on it — not least because of the outpouring of support from young women at CIA and, indeed, across the IC, who consider it a good sign for their own prospects.

The brutality inherent in the business of building and maintaining the US empire isn’t one we should be praising women, nor anyone else, for their role in. It should be the role of the media to draw attention to Haspel—and the CIA at large—for their work perpetuating the country’s long, bloody campaigns around the world, rather than cheerleading her as some kind of feminist hero.