The Washington Post has been forced to remove Russia from the headline and alter the content of its front-page “scoop” over a supposed conversation between Barack Obama and Facebook founder Mark Zuckerberg, after the social network denied the newspaper’s claims.

Under the headline“Obama sought to prod Facebook on Russia role,” the three-author story alleged that “Obama and his top aides quietly agonized over how to respond to Russia’s brazen intervention on behalf of the Donald Trump” prior to the 2016 election, before the last US president “pulled the youthful tech billionaire aside and delivered what he hoped would be a wake-up call” last November.

Only this is not what the exchange at the APEC conference in Peru on November 19, 2016 was about – and there was no mention of political interference from Moscow or anyone else. 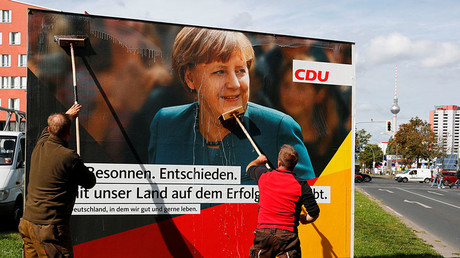 “Their conversation was about misinformation and false news, which Mark had addressed the previous day in a post that outlined specific steps Facebook was taking to combat these challenges. The discussion did not include any references to possible foreign interference or suggestions about confronting threats to Facebook,” the social network in a statement.

The Washington Post, owned by Amazon founder Jeff Bezos, has changed the story title in its online archive, and says its piece has now been “updated with an additional response from Facebook.”

The authors used the misrepresented Obama conversation as a hook into a 2,500-word report about the social network’s slowness in catching on to, and counteracting purported Russian meddling, and to put forward expert claims that it “dragged its feet and is acting only now because of outside political pressure.”

“We believe in the power of democracy, which is why we’re taking this work on elections integrity so seriously, and have come forward at every opportunity to share what we’ve found,” Elliot Schrage, Facebook’s vice president for public policy and communications, told the Washington Post in response.