A hilarious exchange between cops and a wanted woman has left Facebook users baffled and bemused at policing in the age of social media.

Officers tried to snag Kellie Beasley, 40, in a Facebook post appealing for communities across the UK to look out for her.

But, within hours, Beasley herself decided to make an appearance. The furious ‘fraudster’ began commenting on the post, denying allegations that she stole a pensioner’s handbag.

Police then attempted to coax Beasley into handing herself in, while social media users sat back and shared the popcorn emojis.

Angered Beasley began her reply: “They’re lying I will prove it yes fraud not old women all my people no I wouldn’t do that f*****g pig liars and the police will be apologising.”

In response, Wandsworth Police attempted to calm her down, writing: “Kellie, the easiest way to sort this out is to go into your nearest police station and hand yourself in. It will get the matter sorted much quicker than arguing with us online.

“Or you could tell us where you are and we’ll come to you – we’ll even arrange transport. But we need to speak to you – in person – about this very soon.”

Beasley insisted she would sue police for making false allegations and for attempting to find people to “grass me up.” The suspect repeatedly denied the accusations that she had robbed an old lady – but admitted she had committed fraud in the past.

One woman hilariously warned her: “You do not have to say anything, but it may harm your defence if you repeatedly admit fraud on social media.” 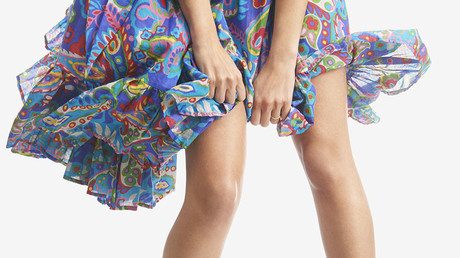 Other Facebook users found the exchange hilarious – and disturbing. One woman posted: “Just to give you a giggle, the lass is actually arguing with the police on her own wanted post. If this is real…stop the planet…I’m getting off!!!!”

Another said: “This has to be a viral plot of some new Channel 5 show, right? It’s genius.”

Some even said it was “better than Eastenders and corrie,” referring to the popular UK soap operas.

One user wrote: “Should we take bets on how long it takes them to track Kellie down now that she’s left a digital footprint big enough to see from space? I give her 12 hours tops.”

However, some were highly unimpressed with the conduct of the police, who hoped the public would help track Beasley down.

One man wrote: “Is this really what policing in the met has become? A witch hunt on social media? It’s really quite pathetic…. Also, you better hope that she’s convicted (by a court) of the crimes you allege, or you’ve left yourselves open to a lible [sic] claim… And you wonder why people have lost faith in the police?.. idiots!”