Vox produced a flashy, extremely hawkish video fearmongering about the likelihood of a second Korean War—and all the experts featured in it just so happen to work for the United States government.

For the description under the six-minute video, which is dramatically titled “The Horrific Reality of a War With North Korea,” Vox wrote: “Five experts discuss what a war on the Korean peninsula would look like, how close we are to conflict, and the terrifying consequences.”

Who are those five experts opining on the prospects of a new war?

That is to say, four of the five experts cited by Vox directly worked for the government. The fifth expert works at a think tank that is substantially financed by the Pentagon and does research contract work for it.

In its reporting on North Korea, Vox makes no pretense of neutrality or independence. The news outlet may not be state-owned, but it continues a well-established corporate media trend of reflexively echoing the positions of the US government as if they are undeniable facts and an objective reflection of reality—a trend that is also manifest in Vox‘s CIA-inspired reporting on Iran and other Official Enemies. 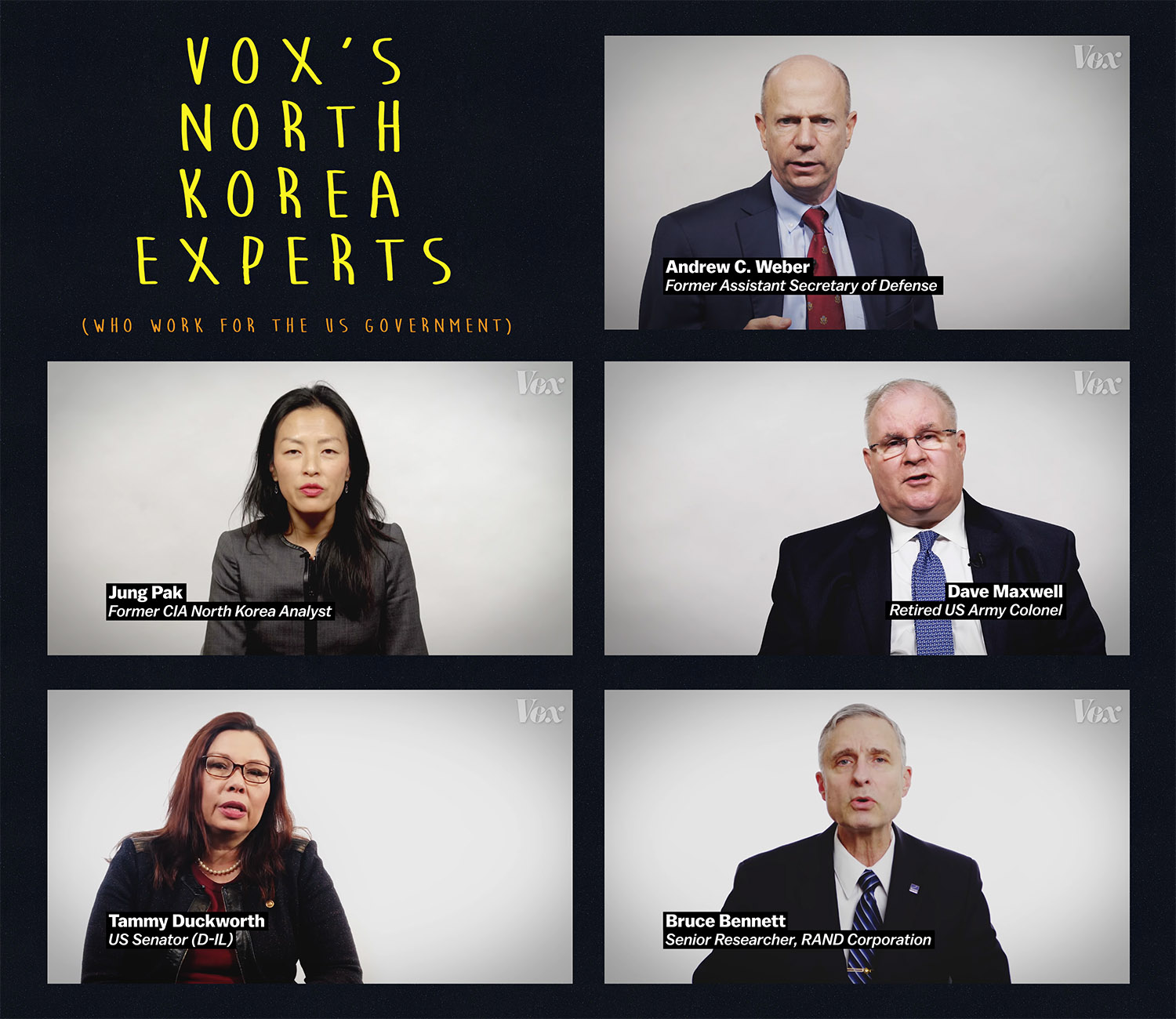 The only person to appear in Vox‘s video who is not directly employed by the US government is Bruce W. Bennett, a military researcher who specializes in Northeast Asian issues. Bennett notes clearly in his RAND profile that he has worked extensively with the US, South Korean and Japanese governments, including the Office of the Secretary of Defense, the Defense Threat Reduction Agency, US Forces Korea and Japan, the US Pacific Command and Central Command, the South Korean and Japanese militaries, and the South Korean National Assembly.

The RAND Corporation is really a parastatal organization, and makes it clear on its website that the majority of its funding comes from the US government. RAND lists dozens of US government departments, agencies and institutions as clients and grantors.

RAND also lists the governments of South Korea and Japan in its list of clients and grantors. 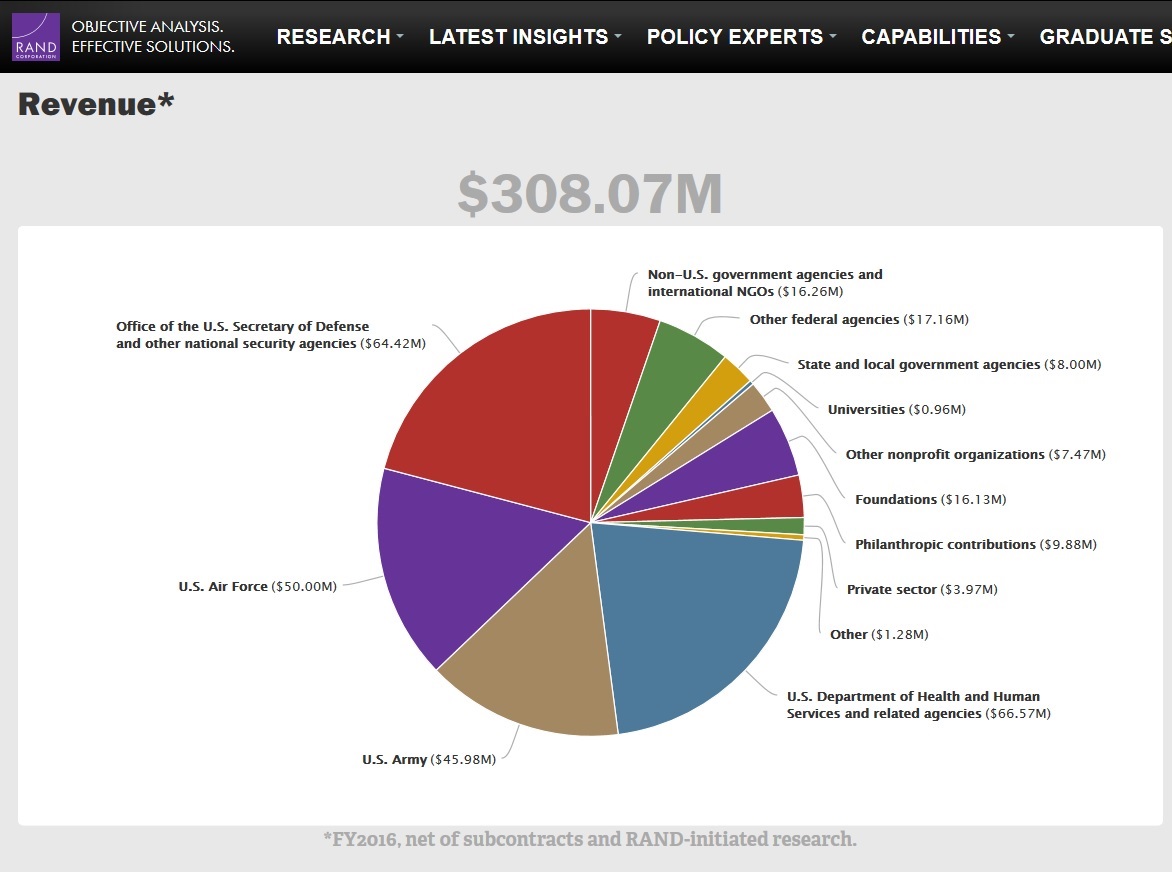 Pushing for Aggressive US Action Against North Korea

Unsurprisingly, the US government-linked experts cited by Vox portray North Korea as the primary aggressor, and the United States and its South Korean ally as the noble defenders of peace.

The video is so unnuanced in its presentation of North Korea, it literally depicts leader Kim Jong-un as a cartoon villain with an atomic mushroom cloud behind him.

It has been waiting for the right conditions in the past 65 years and at some point, when it deems it has the advantageous position or when it has no other option, it may very well attack South Korea, seeking to unify the peninsula under the northern regime’s control for one single purpose, and that is to ensure the survival of the Kim family regime.

The video opens with a terrifying quote from Sen. Tammy Duckworth, an Iraq War veteran who retired from the US Army as a lieutenant colonel: “There’s no limited warfare option when it comes to open conflict with North Korea.”

We have to understand that trying to take a humanitarian attack with them isn’t going to get us very far. We’ve got to be prepared to show them strength for them to respect us.

Maxwell goes on to warn, “The scale of fighting will be greater than anything we’ve seen around the world since the Korean War, not just on the Korean Peninsula.”

To be clear, not all of the chosen Vox experts agreed that war is an inevitability, and certainly not an aspiration. Senator Duckworth, for her part, has been publicly warning against the possibility of violent conflict with North Korea, and criticizing President Donald Trump for hurtling down the path toward what would doubtless be a catastrophic war.

I think that a military strike will only reinforce the belief among North Koreans that they need nuclear weapons to make sure that they maintain their sovereignty and their independence of action.

But Pak still maintained that the North Korean government is “fundamentally” an impediment to peace, telling Vox:

I think most people would say that peaceful unification of the Korean Peninsula is the preferred way of going about this, but I think that North Korea’s ambitions are fundamentally at odds with US policy and South Korea’s policy.

After leaving the Central Intelligence Agency, Pak is now the chair of Korea studies at the influential think tank the Brookings Institution, which receives funding from the US government (and from the governments of Qatar, the United Arab Emirates, Australia, and more).

Pak concluded the Vox video maintaining that severe sanctions are the preferable solution:

Sanctions have never been tougher. There are internal stresses in the regime as the sanctions take hold, and the diplomatic isolation will continue to damage the regime’s ability to gain hard currency for its weapons programs. Now I think we owe it to ourselves and to our allies and for global peace to let the maximum pressure work its way on North Korea.

Erasing US Attempts to Sabotage Peace in Korea

What Vox‘s video does not entertain even for a second is the notion that the United States is the force preventing peace in the Korean Peninsula, not North Korea.

In reality, the North Korean government has reiterated for years that it would consider denuclearizing if the US stopped its hostile policies, as The Intercept (8/25/17) has noted. The DPRK has requested as a precondition for halting nuclear tests that the US cease its joint annual military exercises with South Korea; Washington has persistently rejected the offer.

Moreover, in 2017, South Korea elected a liberal president, Moon Jae-in, who has pursued a more open approach to negotiations with the North. This infuriated the US, which has kept some 26,000 troops in the south for decades, and pressured the country to install the unpopular THAAD missile interceptor system.

In January, North and South agreed to march their athletes together under a unified Korean Peninsula flag at the opening ceremony of the Winter Olympics. In a sign of a move toward rapprochement, they also agreed to create a joint women’s ice-hockey team.

The Trump administration, which has repeatedly threatened North Korea with a nuclear holocaust, was enraged. Vice President Pence made it clear that he would actively seek to sabotage efforts at peace on the Korean Peninsula. As CNN (2/5/18) put it: “Pence will try to disrupt normalization of North Korea at the Olympics.”

As the governments of South and North Korea sought to use the Olympics as an opportunity to work toward reconciliation, the vice president announced that the Trump administration would impose “the toughest and most aggressive round of economic sanctions on North Korea ever.”

None of this context is even hinted at in the Vox video. The open, concerted attempts by the US government to derail even the mildest peace efforts are erased.

Instead, viewers are presented with an array of US government-linked talking heads who insist the only options to resolve the conflict in Korea are devastating sanctions or apocalyptic war.