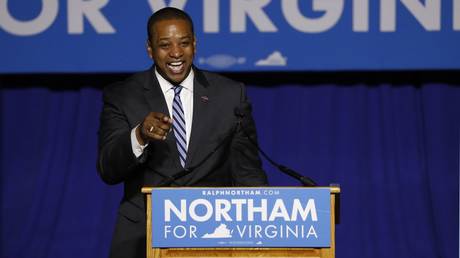 As Virginia Governor Ralph Northam refuses to resign over a 30-year-old blackface scandal, Justin Fairfax, the lieutenant governor and the man who would replace him if he did step down, is in some hot water of his own.

Fairfax has adamantly denied allegations of a sexual assault that surfaced in Big League Politics – the same outlet that first published Northam’s controversial 1984 medical school yearbook photo. As part of his denial, Fairfax used the fact that the Washington Post didn’t publish the #MeToo allegation (despite looking into it) as proof that it was untrue.

In a statement, Fairfax’s office wrote that after examining the claim for several months, the Post decided not to publish it due to “the absence of any evidence corroborating the allegation, and significant red flags and inconsistencies within the allegation.”

Also on rt.com
‘Wasn’t me, I wore blackface on another occasion’: Virginia gov backpedals on yearbook photo scandal


The Post, however, had a different interpretation of events, writing in an article on Monday that while it was true that the paper could not find evidence to corroborate either version of the story, it “did not find” the “significant red flags and inconsistencies within the allegations” that Fairfax claimed it had.

While Fairfax claims the encounter with the woman in a hotel room during the 2004 Democratic National Convention was consensual, she has a different story, claiming that he assaulted her. She approached the Post in 2017 saying she felt she had an obligation to speak out.


The conservative outlet that first aired the assault allegation is the same one that published the infamous photograph from Northam’s yearbook, showing two figures – one in blackface and the other wearing KKK robes – on the page belonging to the future governor. Northam at first admitted one of the people in the photo was him, but then denied it a day later in a stunning turnaround.

Northam has been widely criticized by members of his own party and faced resounding calls to step down. Fairfax himself has not explicitly called for Northam’s resignation, but condemned the blackface photo and said he “cannot condone” his boss’ past actions.

If Northam does resign, Fairfax would be next in line to take up the governorship. If he is somehow disqualified, the next person in line would be Virginia’s Attorney General Mark Herring, also a Democrat.