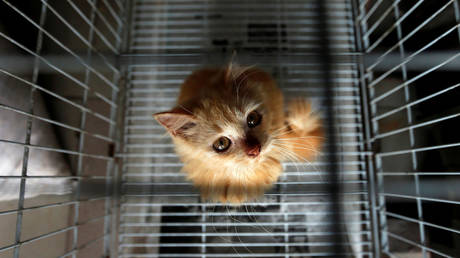 US scientists have been conducting “questionable” experiments on felines for over three decades, feeding them dead cats and dogs and killing off perfectly adoptable lab animals after the tests, a watchdog has found.

The damning report, dubbed ‘USDA Kitten Cannibalism’ has been unveiled by the White Coat Waste Project this week. The animal rights watchdog is striving to stop the US government from spending taxpayer money on animal experiments – many of which turn out to be quite questionable, to put it mildly.

The report highlights the activities of the US Department of Agriculture (USDA), specifically its research into toxoplasmosis, which has been going on since 1982 at the Animal Parasitic Disease Lab in Beltsville, Maryland. Toxoplasmosis is a parasite disease, believed to be affecting nearly half of humankind and many domestic animals. While it poses certain health risks to those, whose immune system is weakened, it usually evokes no noticeable symptoms.


Certain tests were quite bizarre and included feeding the cats the body parts of other animals – dogs and other cats – infected with toxoplasmosis, injecting mice with fluids harvested from dead animals, and so on. The body parts had been procured by the USDA at animal meat markets in China and Vietnam, according to the report.

Killing the cats – as well as using them for tests in the first place – is “unnecessary and unjustifiable,” the watchdog stated. The scientific value of such tests has been very limited and even further diminished in the last two decades.

“Dog and cat meat represents an abnormal diet for cats, dogs and mice so it is likely irrelevant to natural toxoplasmosis biology. Their scientific relevance and justification is questionable, at best, as is their relevance to American public health since we do not consume cats and dogs,” the report reads.

The infected cats then were tested, parasite eggs were harvested from their feces and the felines were killed off two weeks afterwards – as they’d developed immunity. While the animals were perfectly fine to get adopted and did not pose any health risks to potential owners, they did not even get such an option.

“These healthy kittens –who briefly pass the parasite’s eggs and become immune within weeks– are then killed and incinerated by USDA because they are no longer useful,” the report states.

Animal testing carried by the USDA is an exemplary case of “incredible” hypocrisy, especially as the US Congress condemned cat and dog meat farms and markets, outlawing them in the US and exerting pressure on other countries that have them, Justin Goodman, the White Coat Waste Project’s vice president, has said.

“The US government has been sending people over and sending money over to these countries and subsidizing these very cat and dog meat farms and markets that Congress is so disgusted with, and virtually everyone in America wants to see ended. So it’s incredibly ironic and hypocritical,” Goodman told RT.

Also on rt.com
USDA lab killing ‘hundreds’ of kittens by ‘incineration’ as part of study – congressman


“And I think it is a testament to the incredible lack of accountability at the USDA. When on one hand you have the entire nation working to stop the practice that the USDA is helping to keep alive. Truth is that virtually any experiment on animals in the United States is legal as long as the right paperwork is filled out.”

While the USDA admitted that a “total of 2,988 cats have been used in these research efforts,” the animal rights group believes the death toll for felines is actually considerably higher. Last year, it sued the USDA, accusing it of withholding information on the cat-horror Maryland laboratory.