The US will spend no more money on the reconstruction of war-ravaged Syria if it does not see off Iranian troops, US Secretary of State Mike Pompeo has said. The US previously said it would stay in Syria as long as Iran is there.

Speaking to the pro-Israel Jewish Institute for National Security of America on Wednesday, Pompeo said that Damascus should kick out Iranian elements that helped it to drive out the Islamic State (IS, formerly ISIS) from large swathes of its territory, if it wants to keep receiving reconstruction assistance from Washington in the future.

“If Syria doesn’t ensure the total withdrawal of Iranian-backed troops, it will not receive one single dollar from the United States for reconstruction.”

Pompeo noted that Washington holds Damascus responsible for the departure of Iranian forces, saying that “the onus of expelling Iran from the country falls on the Syrian government.”

READ MORE: US sanctions are ‘an irritant but don’t bite, doomed to fail in Iran, Turkey and Russia’

While the US has long demanded that the Iranian forces, which are in Syria at the invitation of Damascus, leave their positions, it the first time Washington has linked humanitarian assistance to Iran’s complete withdrawal.

Only last August, Iran and Syria signed a defense agreement that was aimed at rebuilding Syria’s severely depleted armed forces and its military industry. 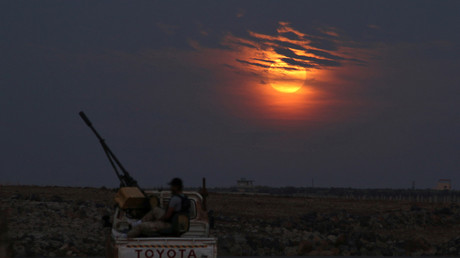 Washington has been doing the bidding of its main ally in the Middle East, Israel, which accuses Iran of an attempt to gain a foothold in the country so it can attack the Jewish state.

The withdrawal of Iranian troops from Syria was one of the key demands included in a 12-point plan that Pompeo set out for Tehran in May, threatening to hit the Islamic Republic with the “strongest sanctions in history” if it does not comply.

At the same time, the US itself is in no rush to scale down its military involvement in Syria.

The new open-ended commitment to the withdrawal of the US troops is a U-turn from the previous approach indicated by Trump. The US president said in March that US forces would leave the Syrian battleground “very soon.”

However, as Syrian troops backed by Russia and Iranian militias have regained most of the territory from the terrorists, Washington has changed its rhetoric. The US special representative for Syria, James Jeffrey, said in September that Washington would remain until the “enduring defeat” of Islamic State, clarifying that the US was “not in a hurry to pull out.”

US President Donald Trump’s National Security Advisor John Bolton seemingly set things straight on the contentious matter when he stated in late September that the US forces were “not going to leave as long as Iranian troops are outside Iranian borders, and that includes Iranian proxies and militias.”