Three US senators have called on the Pentagon to immediately reveal the extent of US military support to the Saudi-led Arab coalition that launched an attack on Hodeidah, a key port city and last humanitarian lifeline in Yemen.

“We call on you to immediately disclose the full extent of the US military role in the Saudi-led war against Yemen’s Houthis, including the use of special operations forces; disclose any role that the Pentagon is currently performing, has been asked to perform, or is considering performing regarding an attack on the port of Hodeida,” says the letter sent to Defense Secretary James Mattis on Friday, and signed by Senators Bernie Sanders (I-Vermont), Mike Lee (R-Utah) and Chris Murphy (D-Connecticut)

Sanders, Lee and Murphy also asked Mattis to “issue a public declaration opposing this impending assault,” and restate the Trump administration’s position that Saudi Arabia and other participants in the conflict “should accept an immediate ceasefire and move toward a political settlement.”

.@SenMikeLee and I call on Sec. Mattis to immediately disclose the full extent of the U.S. military role in the Saudi-led war against Yemen’s Houthis and issue a public declaration opposing the impending assault on Hodeida. https://t.co/jZx5G2Je7i

The letter comes as the Saudi-led coalition forces captured the approaches to Hodeidah airport, as part of their push to seize the port that provides a lifeline to Yemenis who live in territories under the control of the Houthi rebels.

“We are at the edges of the airport and are working to secure it now,” the Saudi-led coalition told Reuters. “Operational priority is to avoid civilian casualties, maintain the flow of humanitarian aid, and allow for the UN to press the Houthis to evacuate the city.”

Meanwhile, a Swedish proposal in the UN Security Council, calling for the Saudi coalition to implement a ceasefire, was blocked by the US and UK envoys. 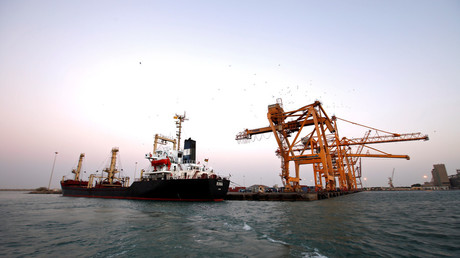 The US has acknowledged providing intelligence and logistics support to the Saudi-led coalition. Washington has also sold weapons and ammunition to Riyadh, worth hundreds of millions of dollars, including tanks and bombs, since the war began.

Back in March, Mattis called US assistance “non-combat support” and argued in a letter to lawmakers that ending it “could increase civilian casualties, jeopardize cooperation with our partners on counter-terrorism and reduce our influence with the Saudis – all of which would further exacerbate the situation and humanitarian crisis.”

Despite the insistence from Riyadh that several other ports in Yemen and Saudi Arabia are available, Hodeidah is a major lifeline for millions of Yemenis who rely on aid after years of warfare have devastated the country. If the coalition attack damages the port facilities, the flow of aid would be severely reduced, charities have warned.

“About 70 percent of Yemen’s aid and commercial imports enter through [Hodeidah] and the nearby Saleef port, providing food, fuel, and medicine that the population needs for survival,” Human Rights Watch said, according to CNN.

The group estimates that around 600,000 civilians live in and around the city. Up to 22 million Yemenis depend on humanitarian aid, while 8.4 million are in immediate danger of starvation.

The Saudi-led coalition has been waging a brutal military campaign in Yemen since March 2015, trying to restore former president Abd Rabbu Mansour Hadi to power. The three years of Saudi-led bombardment and blockade has led to the near-collapse of Yemen. Riyadh and its coalition partners accuse the Houthis of being agents of Iran, a charge the rebels deny, saying they are the legitimate government defending Yemen from outside aggressors.