Senator Lindsey Graham (R-South Carolina) is a “danger to the country” for suggesting a US war against North Korea, said his colleague Rand Paul (R-Kentucky) as Americans waited for the historic summit in Singapore.

“Lindsey Graham is a danger to the country by even proposing ideas like authorizing war with Korea, my goodness,” Paul told CNN’s Wolf Blitzer on Monday afternoon. “Serious people” should not even be discussing such a “naive” idea, he added, and he would “absolutely not” vote for such a measure in the Senate.

Senator Rand Paul says “Lindsey Graham is a danger to the country by even proposing ideas like authorizing war with Korea, my goodness.” He adds that “serious people” shouldn’t even be discussing that. https://t.co/Vzv6e1JQ8opic.twitter.com/ACjRvkSbe5

Blitzer seemed taken aback that Paul would criticize a fellow Republican, even though he and Graham have a long history of disagreeing on foreign policy. Paul is a fiscal conservative opposed to US interventions abroad, while Graham is one of the more hawkish senators, second only to his friend John McCain (R-Arizona). 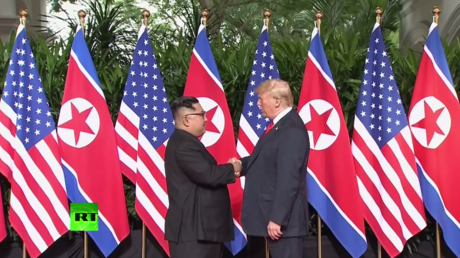 Graham has a “naive worldview where he believes that war is always the answer,” Paul said. Not only is that “bankrupting us as a country,” but the US involvement in dozens of wars around the world is creating a reaction with consequences worse than if Washington never intervened, the senator from Kentucky argued.

On Sunday, Graham sought support for his proposal from the Democrats, who earlier sent a letter to President Donald Trump with a series of demands for the summit with North Korean leader Kim Jong-un.

“A bipartisan [authorization to use force] would really make that letter much more credible, and if diplomacy fails, as a last resort, Democrats and Republicans need to put the military option on the table or we’ll never get a good deal,” Graham said on ABC’s ‘This Week.’

“I love my friend Lindsey Graham, but I think first we need a chance at peace,” declared Sen. Bob Menendez (D-New Jersey), ranking member on the Foreign Relations Committee. Another committee member, Ed Markey (D-Massachusetts), declared that “There is no military solution to the problem on the Korean Peninsula.”

Trump has not addressed the Democrats’ demands directly, but tweeted disapproval for “haters and losers” saying that the summit was somehow a loss for the US.