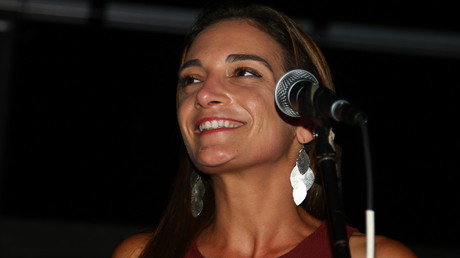 Julia Salazar is a Democratic candidate for the New York State Senate and member of the Democratic Socialists of America. She faces off against incumbent Martin Dilan on Thursday. With just days to go, Salazar tweeted that she was sexually assaulted by Keyes in 2013, before he took up his post as Netanyahu’s spokesman.

While Salazar had made and deleted a Facebook post detailing her alleged experience in 2016, her tweet on Tuesday came in response to a planned story by the conservative Daily Caller “outing” her as the assault victim. The Times of Israel had originally reported on accusations against Keyes in 2016, but had concealed Salazar’s identity.

Speaking to feminist blog Jezebel on Tuesday, Salazar described her alleged encounter with Keyes. Salazar was a 22-year-old student at Columbia University in 2013, and was involved in pro-Israel activism on campus. Keyes reached out to her on Twitter and suggested they meet up for tea and to discuss Middle Eastern politics.

Locked into a discussion on Israel and Palestine, the pair went back to Keyes’ apartment when the cafe closed. There, she alleges, Keyes became “pushy.”

He “physically powered over me, put his arm around me and started forcibly kissing me,” Salazar claimed. Keyes supposedly forced Salazar to perform oral sex on him, and would not let her leave until he had finished. After their encounter, Salazar told Keyes she didn’t want to see him again, and cut off contact with him. She did not report Keyes to the police.

Keyes denied the allegations in 2016, and said that “there was absolutely no coercion in our encounter.” According to the Daily Caller, reporters from The Intercept and The Atlantic contacted Salazar at the time to investigate the accusation, but dropped the story when Salazar would not cooperate.

However, Wall Street Journal reporter Shayndi Rice lent her support to Salazar on Tuesday, saying that she too had “a terrible encounter with David Keyes once and 100% believe her.”

“The man had absolutely no conception of the word ‘no,” Rice tweeted. “No matter how often I said no, he would not stop pushing himself on me. I was able to extricate myself quickly and it was a very brief and uncomfortable moment but I knew as I walked away I had encountered a predator.”

Rice added that in subsequent conversations, she “discovered his mistreatment of women was an open secret.”

The man had absolutely no conception of the word “no.” No matter how often I said no, he would not stop pushing himself on me. I was able to extricate myself quickly and it was a very brief and uncomfortable moment but I knew as I walked away I had encountered a predator.

Keyes once again addressed Salazar’s accusation on Tuesday. “This false accusation is made by someone who has proven to be repeatedly dishonest about her own life,” he said. “This is yet another example of her dishonesty.”

Dishonesty has plagued Salazar’s Senate campaign. The 27-year-old was caught lying about her Jewish identity last month, and confessed that her Jewishness was limited to “family lore,” after old university classmates came forward and claimed she reinvented herself as a left-wing Jewish Democrat for her own political gain.

Salazar also claimed to have been born in Colombia, and to come from a working class background, when in reality she was born in Miami, Florida and grew up comfortably well off, inheriting a $685,000 trust fund upon her father’s death in 2009.

Details of Salazar’s trust fund emerged during a bizarre legal case in which Salazar was accused in 2011 of attempting to impersonate the ex-wife of baseball player Keith Hernandez to access her bank accounts. The ex-wife, Kai Hernandez, alleged that Salazar and her husband had been having an affair, but both denied the charge. Salazar sued Hernandez’s ex-wife for defamation, and ultimately won.

Voters in Salazar’s Brooklyn district go to the polls on Thursday, in a small-time, down-ballot state senate primary that has raised more eyebrows and generated more headlines than any the district has seen before.