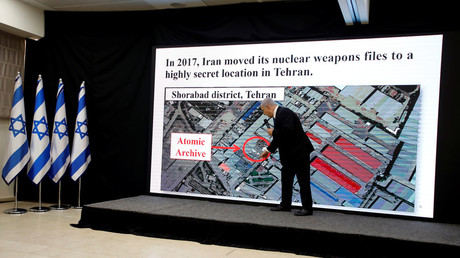 The “new and compelling” details about Iran’s nuclear program revealed by the Israeli prime minister are “consistent” with what the United States has long known, the White House said after Benjamin Netanyahu’s flashy presentation.

On Monday, Prime Minister Benjamin Netanyahu accused Iran of “lying” about its nuclear research program. Citing evidence from a trove of secret files that the Israeli intelligence allegedly managed to obtain from Tehran’s nuclear research archive, the Israeli PM claimed Iran was pursuing a nuclear weapons program when it brokered the Joint Comprehensive Plan of Action (JCPOA) with the international community.

The White House, which has long sought to amend or scrap the nuclear deal with Tehran, welcomed Netanyahu’s “revelations.”

Here’s what Project Amad’s explicit goal was: creating nuclear weapons. This is an original Iranian presentation from these files, and here’s the mission statement: Design, produce and test five warheads, each with ten kiloton TNT yield for integration on a missile. pic.twitter.com/uq2jOxjtJJ

“This information provides new and compelling details about Iran’s efforts to develop missile-deliverable nuclear weapons,” the White House said in a statement. “These facts are consistent with what the United States has long known: Iran had a robust, clandestine nuclear weapons program that it has tried and failed to hide from the world and from its own people.”

The Iranian regime has shown it will use destructive weapons against its neighbors and others. Iran must never have nuclear weapons. https://t.co/xYcJXJpVQh

While the White House promised to “carefully” examine the information, President Donald Trump already used the opportunity to state that the Israeli presentation proves that he was absolutely correct in his own assessment of Iran’s nuclear threat.

“I think if anything what’s happening today and what’s happened over the last little while… has really shown that I’m 100% right” about the 2015 nuclear deal, Trump said at a joint press conference with his Nigerian counterpart, Muhammadu Buhari. Once again criticizing the deal, Trump warned that Tehran might soon have the capabilities to produce nuclear warheads.

“In seven years, that deal will have expired and Iran is free to go ahead and create nuclear weapons. That is not acceptable. Seven years is tomorrow, that’s not acceptable,” he noted.

Trump previously slammed the internationally-backed agreement as “the worst deal ever” and threatened to pull the US out of it. The White House has until May 12 to extend sanctions waivers against Tehran. “We’ll see what happens,” Trump said on Monday.

Newly-appointed Secretary of State Mike Pompeo meanwhile reasserted Washington’s commitment to “fix” the Iranian deal, noting that, while Tehran’s research program was “known” to the US, Israeli revelations offer “thousands” of new and “authentic” documents and information on the matter.

“This will, I think, spell out the scope and scale of the program that they undertook there, and I think that it makes clear that at the very least the Iranians have continued to lie to their own people,” Pompeo told reporters. “The Iranians have consistently taken the position that they’ve never had a program like this. This will belie any notion that there wasn’t a program.”