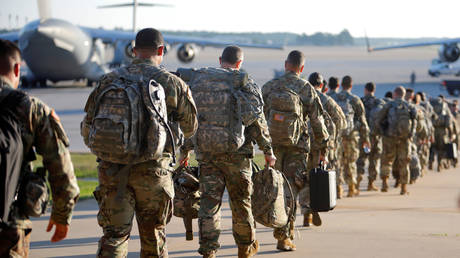 All US forces will be withdrawn from Syria by the end of April, unless the Trump administration decides otherwise, the Wall Street Journal reported citing anonymous “current and former” officials. The Pentagon declined to comment.

A “significant portion” of the US troops currently in Syria will be withdrawn by mid-March, with a full withdrawal by the end of April, even though the Trump administration still lacks a plan to protect the predominantly Kurdish Syrian Democratic Forces (SDF) proxy militia from potential Turkish attacks, according to the WSJ report on Thursday.

“Decisions have to be made,” said one U.S. official. “At some point, we make political progress, or they’re going to have to tell the military to slow down, or we’re going to proceed without a political process.” https://t.co/D2xK9aKQPm

“We are not discussing the timeline of the US withdrawal from Syria,” US Navy Commander Sean Robertson, a Pentagon spokesman, told the paper.

According to unnamed officials, however, the military preparations are proceeding faster than the talks between Washington and Ankara on ensuring that Turkish-backed militias do not attack the US-backed Kurds after the withdrawal.

“The bottom line is: Decisions have to be made,” the WSJ quoted one official as saying. “At some point, we make political progress, or they’re going to have to tell the military to slow down, or we’re going to proceed without a political process.”

Turkey regards the Kurdish YPG militia an extension of the Kurdistan Workers’ Party (PKK), an organization outlawed by Ankara as terrorist and separatist. The YPG makes up more than two thirds of the SDF strength, however, and a recent report noted that without it, the SDF is unable to conduct offensive operations against the remnants of Islamic State (IS, formerly ISIS/ISIL) on the Syria-Iraq border.


US officials were reportedly briefing other members of the anti-IS coalition this week, at a meeting hosted by the State Department in Washington, DC.

Speaking to the coalition envoys on Wednesday, US President Donald Trump said that the last remnants of the IS “caliphate” will be liberated by sometime next week, and urged regional powers to take on a greater role in ensuring IS does not rise again while US troops return home.

Also on rt.com
Trump vows to defeat all of ISIS ‘next week’… but generals say the fight isn’t over


Trump announced the withdrawal of US forces in December, to shouts of disapproval from the media, Democrats, most of the foreign policy establishment in Washington and even some of his allies in the Republican party. On Wednesday, the Senate voted to include a nonbinding amendment in a foreign policy bill that condemned the “precipitous” withdrawal from Syria and Afghanistan, where Trump is also seeking to downsize US military presence.

Turkey has been eager for US withdrawal from Syria, reportedly seeking to establish a 20-mile (32 km) “safe zone” inside the country, against Kurdish objections. The government in Damascus is likewise opposed to a Turkish incursion, and has called for reintegration of territories under SDF control into the rest of Syria.