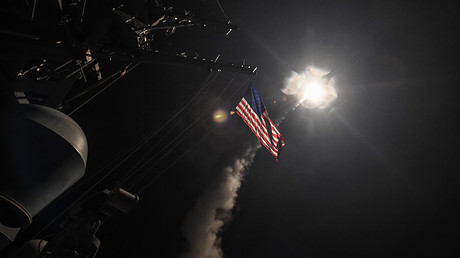 US envoy to the UN Nikki Haley has warned that the US will take action in Syria on its own if the UN Security Council fails to do so. The official cited last year’s attack on a Syrian airbase as an example of possible US action.

“It is not the path we prefer, but it is a path we have demonstrated we will take, and we are prepared to take again,” Haley told the UN Security Council meeting on Monday. “When the international community consistently fails to act, there are times when states are compelled to take their own action.”

When the Security Council “failed to act” after the Khan Sheikhoun chemical incident last year, the US “successfully struck the airbase from which Assad had launched his chemical attack,” Haley stated. It should be noted that the US attacked the base only three days after the incident, without any investigation into it, while the blame was promptly pinned on Damascus.

The US diplomat blamed Russia for not observing the 30-day ceasefire in Syria and accused Moscow of deliberately putting an anti-terrorism “loophole” in the February UNSC resolution.

“With that vote, Russia made a commitment to us, to Syrian people and to the world to stop the killing in Syria. Today, we know that Russians did not keep their commitment,” Haley said, claiming that Russia and Damascus continue to bomb “innocent civilians” under a pretext of fighting terrorism.

Haley announced a new US-sponsored draft of a ceasefire resolution for Syria, which will not have any “anti-terrorism loopholes.” The resolution, if adopted, would take effect immediately and call for a complete cessation of hostilities in Syria. It remains unclear exactly how the US plans to enforce the measure on terrorist groups.