Atlanta police have released bodycam footage following anger over a viral video of a woman screaming and being dragged by her feet by officers during her arrest at an anti-ICE protest which officers claim was violent.

Protesters were picketing the local offices of Immigration and Customs Enforcement (ICE) last week, over President Donald Trump’s now-suspended policy of detaining children of illegal immigrants separately from their parents. Media furor over the policy has touched off anti-ICE protests across the US.

Protest action group AllOutATL shared their footage online, showing the woman being dragged by police across the street, face-down, as she took part in a protest against the immigration policy on July 4. The video went viral, prompting police to release their own recording.

The edited footage does not show the protester’s actions in the lead-up to the violent arrest. Protesters claim that the Occupy ICE ATL protest was peaceful. Police say that things became violent. Bodycam footage shows police bombarding what initially seems like a peaceful crowd, barging through and dragging people out of the group. 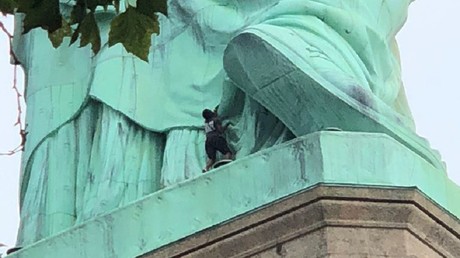 “We did not have to use batons, pepper spray, tasers to make the arrests. It was merely placing individuals under arrest while being resisted as we attempted to do so,” Major Darin Schierbaum of the Atlanta Police Department told WSB-TV.

Police have claimed that protesters were asked to move their protest back to the sidewalk, with the confrontation heating up after 50 people spilled over into the street, blocking traffic.

At that point, “…officers moved in and took six protestors into custody for disorderly conduct, pedestrian in roadway and obstruction charges,” spokesperson for the Atlanta PD Carlos Campos told WXIA-TV. Six people were arrested.

Following the protest, AllOutAtl tweeted “welcome to fascist USA” and said the problem is “capitalism and the nation state.”

“ICE abolitionists build momentum for revolutionary movement that vows to abolish borders and capitalism,” the group said in a statement released Monday.

At least 10 US lawmakers have also come out in favor of abolishing ICE, which was established as a sub-agency of the Department of Homeland Security (DHS) in the aftermath of 9/11 terrorist attacks. Before that, the Immigration and Naturalization Service (INS) was part of the Department of Justice.

“The President’s deeply immoral actions have made it obvious that we need to rebuild our immigration system from top to bottom, starting by replacing ICE with something that reflects our values,” Senator Elizabeth Warren (D-Massachusetts) said on Saturday.

Trump, however, has doubled down on supporting ICE. On Thursday, he tweeted he would not stand for the “vile Democrat smears in law enforcement.”

“We will always stand proudly with the BRAVE HEROES of ICE and BORDER PATROL!” he added.

Every day, the brave men and women of ICE are liberating communities from savage gangs like MS-13. We will NOT stand for these vile Democrat smears in law enforcement. We will always stand proudly with the BRAVE HEROES of ICE and BORDER PATROL!

Trump campaigned on building a wall along the border with Mexico and cracking down on illegal immigration. Immigration reform endorsed by the White House would grant amnesty for some 1.8 million people who entered the US illegally, but end the diversity visa lottery and the practice of so-called chain migration, as well as fully fund the wall’s construction. Democrats have denounced the proposal as racist.