Two dozen bomb-sniffing dogs were killed by an American-owned security firm in Kuwait after its contract with a local oil company expired. The owners say they killed 24 dogs “humanely” because they were sick.

The animals were slaughtered on June 17. There are a further 100 or so dogs at risk of being killed, according to Kuwait Animal Rescue Unit, an animal rights group. 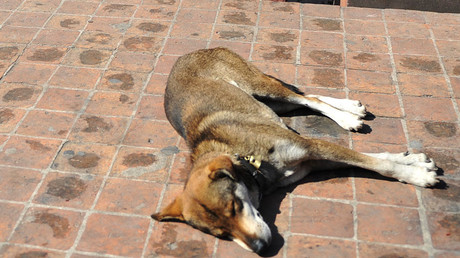 Earlier this week, the group posted graphic pictures on social media showing bodies of dead dogs piled up in corridors inside the base of Eastern Securities of Kuwait. In one of the pictures, a man is seen resting his foot on a dog’s corpse.

Kuwait Animal Rescue Unit says the security firm killed 24 of its sniffer dogs after losing a contract with the oil company, which reportedly paid Eastern Securities $9,900 monthly for each dog.

KNPC has denied being involved in the slaughter. In an interview with the Kuwaiti News Agency, official spokesman Khaled Al-Asousi said the contract with Eastern Securities was terminated after the dogs failed to sniff out explosives during a third-party test.

However, the security company maintains that it humanely euthanized the dogs because they were old and sick ‒ suffering from conditions such as tumors and hip dysplasia ‒ while some were just too aggressive.

“These dogs were suffering in the condition they were in. In my opinion, this should have been done a year ago,” an unnamed employee told the Arab Times, adding that the dogs had been diagnosed with those issues two years ago.

He also said the company unsuccessfully tried to put the dogs up for adoption.

Nevertheless, Eastern Securities’ description of the events did not ring true with Esmail Al Misri, who lodged a criminal case against the company. He believes the slaughtered dogs were innocent victims of a conflict between Eastern Securities and its workers, who had not been paid since April 2016.

Misri is especially concerned because he said there are another 90 dogs at risk of being killed. His lawsuit is now awaiting investigation by the authorities.

Eastern Securities executives have denied the allegations the company will put down more dogs.

READ MORE: Shark dies after lifeguards & tourists drag it out of sea for photos (VIDEO, PHOTOS)

However, the company has a previous incident on its record of killing canines.

“The company had taken steps to euthanize small groups of dogs over a period of time, but a member of our kennel staff jumped the gun and euthanized them all at once. He has been [fired] for going against the procedure,” the anonymous worker told the newspaper.

The Kuwait Animal Rescue Unit, which made the dog massacre public, is now asking for “animal lovers in Kuwait, USA, and other countries” to give the case greater publicity.