US troops in the Baltic countries would be “outranged, outgunned and outmatched” by Russians in case of a conflict, the head of the US European Command told lawmakers, seeking to secure funds in the face of a Moscow “threat.”

“If you look at it in a concentrated way on the border of Eastern Europe and only on the ground force, I would agree with that statement,” General Curtis Scaparrotti told Senator James Inhofe (R-Oklahoma) at a Senate Armed Services Committee hearing on Thursday.

Inhofe was referring to the recent RAND Corporation report which found that Russian forces could take the capitals of Estonia, Latvia and Lithuania within 60 hours. The report has been compiled over the past several years, with the assistance of EUCOM, Scaparrotti said.

“I don’t have any argument with the basis of the report and the threat that we have,” he added. Though the RAND report concluded that NATO has “sufficient resources, personnel, and equipment to enhance conventional deterrence focused on Russia,” it argued a “more robust posture … is worthy of consideration.”

“Hence my comment that I don’t have all the forces I need in Europe today,” Scaparrotti lamented, despite admitting that the US has “repostured forces” and “rewritten plans” of containing Russia over the past few years.

Last month, EUCOM requested $6.5 billion for its European Deterrence Initiative in 2019, which is roughly $2 billion more than requested for fiscal 2018. 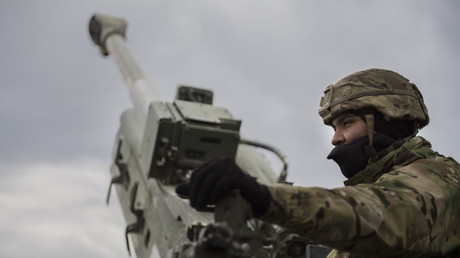 Following plans drafted by the Obama administration, the US deployed military forces into Poland and the Baltic states last year, to “reassure” its allies in the face of “Russian aggression.” Reserving the right to defend its national security, Moscow has long sought compromises in the face of the US and NATO’s creeping expansion towards Russian borders after the end of Cold War, with Poland joining in March 1999 and the Baltic States in 2004.

Scaparrotti took over EUCOM in May 2016, and has continued the drumbeat of hostility to Russia set by his predecessor General Philip Breedlove. He asked the lawmakers to approve the budget requests for more troops, supplies and information warfare programs to counter the “threat” of Russia.

At Thursday’s hearing, he accused Moscow of seeking to “change the international order, fracture NATO, and undermine US leadership.” Russia continues to intercept “routine reconnaissance flight operations over the Baltic and Black Seas, flying dangerously close to our aircraft and occasionally causing unsafe conditions for our pilots operating in international airspace,” Scaparrotti informed lawmakers, adding that Russia also “continues to hold snap exercises and to limit transparency of planned exercises.”

The US general failed to mention, though, that most of Russia’s military drills take place inside its own borders. The one exception was the September 2017 ‘Zapad’ exercise jointly organized with Belarus. Even though Moscow and Minsk were upfront and transparent about the number of troops involved and the objectives, some NATO, US and Ukrainian officials claimed they were a cover for something more sinister.

Meanwhile, as Scaparrotti was complaining to the senators about Russia’s threatening drills, some 3,700 troops from 26 NATO member states were conducting artillery exercises at the Grafenwoehr range in Germany. The drills, dubbed Dynamic Front 18, began on February 23 and are scheduled to end on March 10. 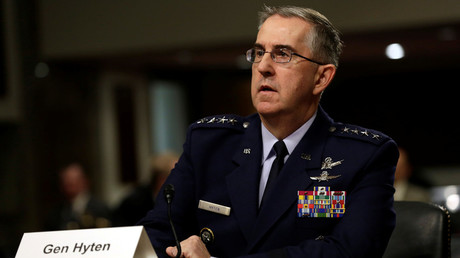 Just last year, EUCOM conducted “over 2,500 military-to-military engagements, including over 700 State Partnership Program events in 22 countries,” Scaparrotti informed the Senate, as well as 22 exercises with nine allies under a special program for Eastern Europe. The US military is also stepping up efforts to “counter Russia’s propaganda and misinformation campaigns” through a joint effort with the State Department called the Russian Information Group (RIG), Scaparrotti said.

Among the long list of ills Scaparrotti accused Russia of was conducting the June 2017 NotPetya cyber-attack, interfering in elections across Europe, and endangering the Balkan countries’ “brighter future as part of the Euro-Atlantic family of nations.” The general also spoke approvingly of the recent Trump administration decision to sell Javelin anti-tank missiles to the government in Kiev, and noted that the US has spent “over $850 million” in aid to Ukraine since 2014.

Though Scaparrotti argued that Moscow could challenge US dominance by 2025, there was little mention of several new weapons in Moscow’s arsenal, revealed last week by Russian President Vladimir Putin as a message to the US and NATO that their attempts to intimidate and contain Russia have failed.

“All the things you were trying to prevent through your policies have already happened. You have failed to hold Russia back,” Putin said.