The Pentagon has no policy for regime change in Iran and the Australian news report that claimed the US was about to launch an attack on Tehran is ‘fiction,’ US Secretary of Defense James Mattis told reporters.

The Australian Broadcasting Corporation (ABC) reported on Friday that the US is preparing to bomb Iran’s nuclear facilities “perhaps as early as next month,” citing “senior figures” in the government.

“I have no idea where the Australian news people got that,” Mattis told reporters at the Pentagon on Friday. “I’m confident it is not something that’s being considered right now, and I think it’s a complete – frankly, it’s – it’s fiction.”

#SecDefMattis just spoke to reporters on #Iran & stories US is planning strikes: “I have no idea where the Australian newspeople got that … I am confident it is not something that is being considered right now. I think it’s…frankly its fiction as best I can give you.” (more)

Australian Prime Minister Malcolm Turnbull also pushed back on the ABC report, calling it “speculation” based on anonymous sources.

Asked if the Trump administration has a policy of regime change in Iran, Mattis replied, “There’s none that’s been instituted.”

“We need them to change their behavior on a number of threats that they can pose with their military, with their secret services, with their surrogates and with their proxies,” Mattis said, according to Reuters. 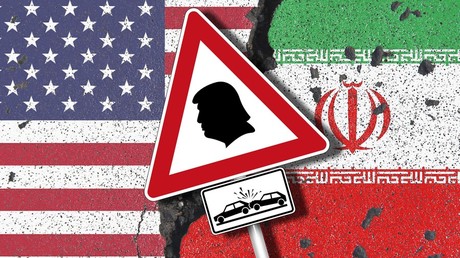 The denial comes at the end of a week that saw US President Donald Trump and Iran trade barbs in all-caps on Twitter..

“NEVER, EVER THREATEN THE UNITED STATES AGAIN OR YOU WILL SUFFER CONSEQUENCES THE LIKES OF WHICH FEW THROUGHOUT HISTORY HAVE EVER SUFFERED BEFORE,” Trump thundered on Sunday, echoing his “fire and fury” rhetoric aimed at North Korea last year.

“COLOR US UNIMPRESSED,” Iran’s Foreign Minister Javad Zarif replied on Monday, noting that Iran has “been around for millennia” and seen the fall of many empires.

In May, Trump unilaterally withdrew the US from the 2015 Joint Comprehensive Plan of Action (JCPOA), the UN-endorsed deal to remove sanctions from Iran in exchange for drastic reductions in nuclear research and enrichment. Trump had denounced the deal as “terrible” on the campaign trail, a sentiment that has been endorsed by the Israeli government.

“If one listens carefully to what Trump was saying, really, the US is not only withdrawing from this multilateral international agreement unilaterally… but it’s also, actually, threatening a regime change in Iran,” Middle East expert Sami Ramadani told RT at the time.

John Bolton, whom Trump appointed as his new national security adviser in April, is on the record as calling for regime change in Iran. So is Rudy Giuliani, the former mayor of New York who is currently Trump’s personal attorney.

Trump is “as committed to regime change as we are,” Giuliani told Iranian exiles in Washington, DC in May. He echoed those remarks at the end of June, addressing another Iranian exile conference in France .