The US military spent $60 million on a new section of power grid in Afghanistan’s northeast. It doesn’t work and may even put residents at risk, according to a report from the US government’s reconstruction watchdog.

While the power lines have been built, the Special Inspector General for Afghanistan Reconstruction (SIGAR) found that mismanagement by the Army Corps of Engineers led to the grid remaining at best useless and at worst, dangerous.

In 2013, the US Army awarded a $116 million contract to an Afghan company to build a power grid for part of northeastern Afghanistan in several phases. The mismanaged third phase of the project cost $60 million.

Before construction was due to begin, the Afghan government agreed to purchase privately held land to clear a path for power lines. This never happened, and the Afghan contractors built the lines regardless, over the heads of Afghan farmers still living on land that should have been cleared.

The contract required the company to “provide power” but did not include any provisions for actually connecting the lines to the nearest substation, rendering them useless.

Because the lines cannot be hooked up to the substation, and because residents still live under them, they cannot be properly tested, and could be potentially lethal. Furthermore, SIGAR inspectors found that many pylons along the lines are built on unsound soil and with poor quality concrete, which has begun to crumble in places. 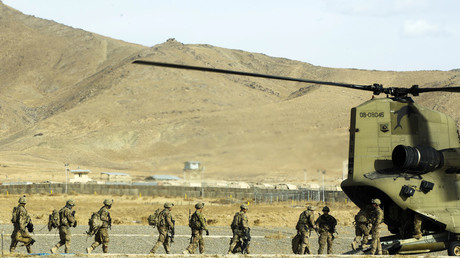 Mismanagement along these northeastern power lines is just one of a litany of reconstruction problems identified by SIGAR. These include cases of bribery and theft of government equipment by US Army personnel, shoddily built infrastructure, and lack of maintenance at schools and hospitals.

The US Agency For International Development (USAID) twice failed to implement an electronic payments system for tax collection in Afghanistan, at a cost of $160 million. Connection and software problems between Afghan banks, as well as a lack of political support for an e-payments system, are blamed for its failure.

Another heavily redacted SIGAR report found that the Pentagon funded Afghan security forces, despite knowing that they were engaged in numerous human rights violations, including rampant child abuse. While composing the document, the watchdog interviewed 37 individuals, 24 of whom stated they knew about children being sexually exploited by the Afghan forces.