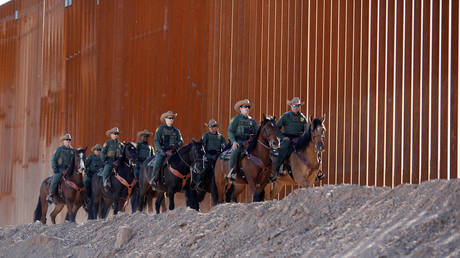 Journalists, activists, lawyers and “organizers” involved with last year’s Central American migrant caravans were tracked by US government agencies, leaked documents reveal – but Homeland Security has been doing this for a while.

At least 59 media professionals and others linked to the migrant caravans were monitored under ‘Operation Secure Line‘ by a coalition of Customs and Border Protection, Immigration and Customs Enforcement, US Border Patrol, Homeland Security Investigations, and even the Federal Bureau of Investigation’s San Diego branch, according to the documents, which a Homeland Security source leaked to NBC. Many of the activists were linked to migrant groups like Pueblo Sin Fronteras, which organizes the caravans, and to Border Angels.

“We are a criminal investigation agency, we’re not an intelligence agency. We can’t create dossiers on people and they’re creating dossiers,” the source told NBC, suggesting his reasons for leaking. “This is an abuse of the Border Search Authority.” The dossiers included photos – taken from social media accounts, in some cases – birthdates, home countries, and alleged role with the migrant caravan, as well as information on whether they had been arrested, detained, interviewed, or otherwise apprehended.


NBC contacted some of the journalists and photographers named in the database, many of whom could confirm they had been pulled aside for enhanced screenings at the border multiple times as they crossed to document the human tide of over 5,000 migrants sweeping north from Honduras, Guatemala, and El Salvador. They were ‘blown away’ to discover the authorities had been hoarding information on them.

“The government cannot use the pretext of the border to target activists critical of its policies, lawyers providing legal representation, or journalists simply doing their jobs,” American Civil Liberties Union staff attorney Esha Bhandari told the outlet, denouncing the targeting of journalists as “an outrageous violation of the First Amendment” and promising to explore “all options in response.”

It’s somewhat surprising that mainstream US media deemed the news of DHS tracking journalists worth reporting, or that the ACLU immediately objected to such intrusive monitoring this time, given a total non-response to last year’s bombshell revelation that the agency was building a massive searchable global database of journalists and social media influencers in order to monitor “sentiment,” among other variables.

The Department of Homeland Security wants to compile a list of journalists.

They’re seeking a contractor to collect data on reporters, bloggers and even influencers – including locations, social media posts and other “relevant” info.

What makes this report different? Is it the presence of a DHS leaker, or the faces and names that might allow us to empathize with the chilling totalitarian possibilities of a heavily-armed all-seeing government agency tracking journalists’ every move, detaining them for upwards of 13 hours at the border when all they’re trying to do is capture the perfect heartstring-tugging photo of a crying migrant child seeking a better life in the US?

Despite what some reporters may suggest, this is nothing more than the standard practice of monitoring current events in the media. Any suggestion otherwise is fit for tin foil hat wearing, black helicopter conspiracy theorists. https://t.co/XGgFFH3Ppl

The DHS never denied that the interactive database project revealed last year exists – they merely mocked any journalist who asked questions about it, literally calling them “tinfoil hat-wearing, black helicopter conspiracy theorists.” Mainstream media obediently refrained from pursuing the story, aside from one determined fact-finder at…Snopes. Since it’s apparently totally normal for a “criminal investigation agency” to be keeping dossiers on journalists all around the world, the story was permitted to slide into the memory hole.

DHS pushes back on reaction to reports that it’s seeking access to a database of journalists and bloggers, arguing that the move is standard practice: “Any suggestion otherwise is fit for tin foil hat wearing, black helicopter conspiracy theorists” https://t.co/ePh66DjdBDpic.twitter.com/oXsC41m7P3

The DHS project gives agents access to journalists’ social network connections and publishing histories, allowing them to monitor trends, the spread of stories, and social media in real time on a massive interactive database – tracking volume, intensity, influencers, geographic trends, momentum, and sentiment. Yet according to DHS spokesman Tyler Houlton, such a sweeping project was “nothing more than the standard practice of monitoring current events in the media.”