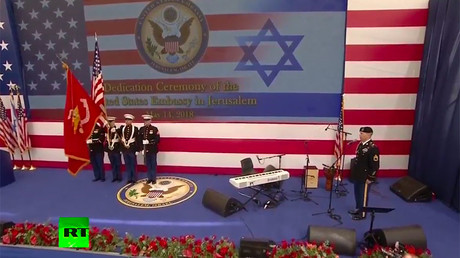 US and Israeli officials are at the highly-guarded Jerusalem compound during an opening ceremony for the new US Embassy, following Donald Trump’s decision to move the diplomatic mission from Tel Aviv last December.

“Today, we extend to Israel the right we extend to any other nation – the right to designate its capital city,” said the US ambassador to Israel, David Friedman, in front of an audience which included Israel’s Prime Minister Benjamin Netanyahu, Ivanka Trump and Jared Kushner.

Meanwhile, according to the IDF, an estimated 35,000 Palestinians are taking part in 12 separate protests. Called ‘The Great Return March,’ they are nominally dedicated to the return of Palestinians to their homeland, but are particularly intense in view of the embassy decision, which was vehemently condemned by the Palestinian leadership.

The UK, Germany, and Washington’s other European allies also criticized the move, which provoked an initial wave of unrest, saying it would further destabilize the region.

The Palestinian Ministry of Health says that 37 people have been killed by Israeli forces during the current demonstrations. Israel has not provided figures of its own, but claims all those dead were either engaged in violence or terrorism under the guise of political protest.

Palestinian officials and activists on the ground have accused Israeli soldiers of firing on unarmed protesters, and other disproportionate uses of force.