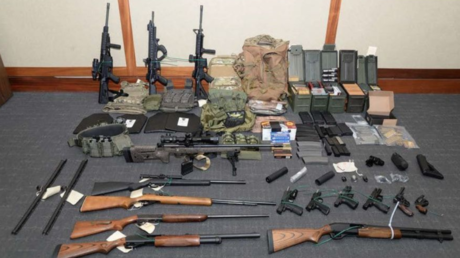 Authorities have arrested a self-proclaimed white nationalist Coast Guard officer who plotted terror attacks on US soil and had compiled a hit list that included prominent Democrats, journalists and other public figures.

Coast Guard Lieutenant Christopher Paul Hasson was arrested last Friday in Silver Springs, Maryland, on charges of possessing illegal weapons and drugs. But soon afterward authorities discovered that the man was far more dangerous than had initially been thought.

At least 15 firearms and over 1,000 rounds of ammunition were seized during Hasson’s arrest. Scraping the “tip of the iceberg,” the prosecution uncovered that Hasson had subscribed to extremist views for years and had contemplated staging “biological attacks followed by attack on food supply.”

According to the federal court documents this photo shows the weapons which were seized from Lt. Hasson’s Silver Spring home. Described as cramped basement apartment. pic.twitter.com/QUNixZwBNU

“The defendant intends to murder innocent civilians on a scale rarely seen in this country,” the government said in court documents. The “domestic terrorist” who hoped to create a “white homeland” is due to appear in court on Thursday, where the prosecution will insist on his continued detention, as he awaits trial.