The US took first place in closing weapons sales deals globally last year, signing agreements to sell about $40 billion worth of military hardware, accounting for half of all such contracts worldwide, according to a congressional study.

The study, titled ‘Conventional Arms Transfers to Developing Nations, 2008-2015,’ showed that the US placed well ahead of the number two weapons dealer, France, when it came to overall weapons agreements clinched in 2015. Paris signed deals worth $15 billion.

The US also sold more weapons to developing countries than any other country, accounting for 41 percent of such deals. The four major Western European suppliers (France, the United Kingdom, Germany, and Italy) placed second as a whole, with 27 percent. Russia was third, with 17 percent. 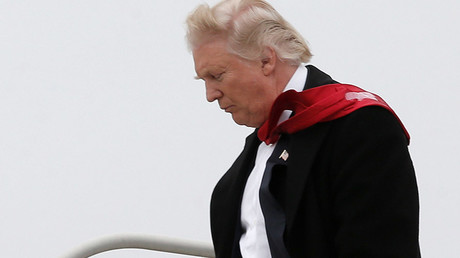 Both the US and France managed to increase their weapons-agreement totals in 2015, despite a drop of almost $11 billion in arms sales overall globally.

The US also ranked first in arms deliveries worldwide for the eighth year in a row, delivering nearly $16.9 billion worth of weapons.

Russia ranked second – a position it has also held for the past eight years – delivering arms worth $7.2 billion globally. France ranked third, with $7 billion in deliveries.

The three countries collectively delivered 67.77 percent of all arms supplied by all nations in 2015.

However, the combined value of international arms deliveries in 2015 dropped to nearly $46.2 billion, down from the previous year’s total of $54.1 billion.

The US placed first when it came to delivering weaponry to developing nations, supplying $11.9 billion worth.

Russia and France tied for second place, totaling $6.2 billion each.

READ MORE: US authorizes F-15 fighter jet deal with Qatar, worth over $21bln

According to the study, developing nations took delivery of the lion’s share of weapons worldwide, scooping up military hardware accounting for 72.7 percent of the value of all international arms deliveries. Qatar, Egypt, Saudi Arabia, South Korea, Pakistan, Israel, the United Arab Emirates, and Iraq were listed as the largest buyers in the developing world.

However, developing nations purchased less on the whole in 2015, buying $65 billion worth of weapons compared to $79 billion the year before.

While study author Catherine A. Theohary, a national security policy specialist at the Congressional Research Service, noted that global weapons sales had increased in 2015, she said that the international arms market is “not likely growing overall.”

“There continue to be significant constraints on its growth, due, in particular, to the weakened state of the global economy,” she wrote in the study.

“Concerns over their domestic budget problems have led many purchasing nations to defer or limit the purchase of new major weapon systems,” she added. “Some nations have chosen to limit their purchasing to upgrades of existing systems and to training and support services.”

The study, which was prepared by the Congressional Research Service, a division of the Library of Congress, was delivered to legislators last week. The annual report, which is considered the most comprehensive unclassified assessment of global arms sales, adjusts for year-to-year inflation.