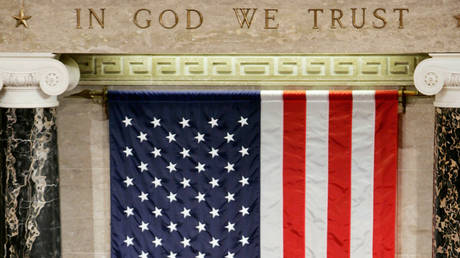 Freedom-from-religion advocates are threatening to sue the state of Mississippi over its new license plate design, which displays the phrase “In God We Trust” – asking for a redesign or at least a free non-theistic alternative.

“Mississippi’s law violates the First Amendment rights of atheists in accordance with firmly settled Supreme Court precedent,” American Humanist Association attorney Monica Miller said in a press release. The group has demanded the state either create a new standard license plate design that doesn’t include the “God” reference, or offer Mississippi residents the option of getting a different design without having to pay.

If the state doesn’t offer the nonbelievers an alternative, they’ll sue, the AHA threatened in a letter to the state revenue commissioner and attorney general. The only current alternatives to the religiously-tinged design, which displays the new Mississippi state seal, require drivers to pay $30 extra per year for “specialty” designs, and revenue commissioner Herb Frierson is asking lawyers to review the request.

State Rep. Tom Miles tweeted in support of the design, which he had a hand in creating.

I see some are upset about our new car tags & our State Seal. I was proud to work to put In God We Trust on our state seal. I love our State seal and I’ve been giving these state seal stickers out for years. If you would like one to show your support let me know #InGODWeTrustpic.twitter.com/X5NPXcjruZ

While others expressed confidence they’d trounce the atheists in court.

Let them sue…. Supreme Court will overturn if they win in the lower courts….

How many atheists and agnostics actually live in Mississippi?

Many told the humanists to quit their whining

Others suggested a few alternative deities drivers could trust in, or other designs altogether.

…or Shiva? How about Anubis, or Ra?

It should say, ‘In safe drivers we trust.’

…while some brought up the separation between Church and State.

You’d be bitter too if you cared about separation of Church & State as outlined in the Constitution. Take “In God We Trust” off the money, drop “God” from the pledge & believers would be weepin’ & wailin’.

I live in Mississippi. It does feel like a separation of church and state issue. Also, who on earth chose the dirty diaper brown for the color!! 😳 I will buy a specialty tag for $30 extra!

Meanwhile, evangelist group the American Center for Law and Justice published a petition just a few days before the American Humanist Association dropped its letter, calling on God-fearing Americans to defend “In God We Trust” from attacks by hordes of secular humanists. Given that the Mississippi license plate design was unveiled three months ago, the timing of the humanists’ letter could be seen as suspect.

The words “bigotry” has been used to describe #America’s #NationalMotto, “In #God We Trust.” The motto has been attacked, with those who oppose it demanding it be banished. We will defend “In God We Trust,” & you can help. Sign our petition today. https://t.co/47itHCpzy5

But there is precedent for their protest – Jehovah’s Witnesses sued New Hampshire in 1977 to demand an alternative to the state’s “Live Free or Die” slogan, which they claimed was “repugnant to their moral, religious and political beliefs.” The Supreme Court declared no state can force a person to display a phrase that violates their beliefs, ruling that the First Amendment protects “both the right to speak freely and the right to refrain from speaking at all.”

Also on rt.com
Donald Trump gets lampooned on Twitter for autographing Bibles