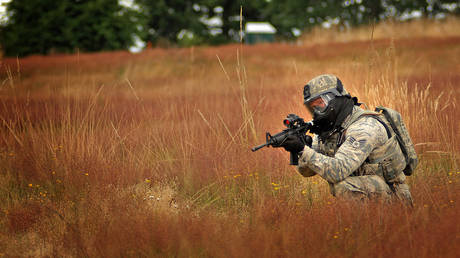 The US Army Corps of Engineers considers “Russian” weeds such a problem in the Pacific Northwest, it is seeking a contractor willing to clear them from an airbase and a training range near Seattle, Washington.

To get rid of the dastardly Russian thistle, Russian olive, Dalmatian toadflax and other “invasive” plants, the Army is looking for a small business with $7.5 million in average annual receipts, and fully licensed by the state department of agriculture as a pesticide applicator. The contract will go to the lowest bidder, of course.

Whoever wins the contract will get a chance to fight “Russian” invaders on some 2,100 acres (849 hectares) of land around the Joint Base Lewis-McChord, south of Tacoma, and the Yakima Training Center on the other side of Mt. Rainier.

The contract, first published at the beginning of February but updated with details this week, would run for one year, with four optional extensions not to exceed one year each.

Russian thistle is another name for tumbleweed. As the name reveals, the iconic plant of the American West actually has origins in the old world, reportedly brought in with flax seeds by immigrants from present-day Ukraine in the 1870s.

Also on rt.com
Reality сheck: When life gives you lemons… make up bulls*** about Russia?


Russian olive – also known as Persian olive and silverberry – also made it over to the US in the 19th century. Other invasive species listed in the Army solicitation were kochia (ragweed), knapweed, cheatgrass, purple loosestrife, bull thistle, and Canada thistle.